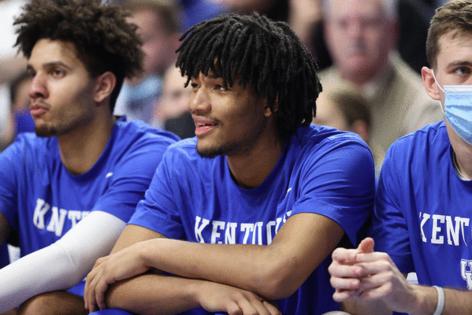 “One of the better individual workouts that I’ve witnessed,” said Marks, who is attending the NBA combine this week. “(Sharpe) shot the heck out of it.”

The problem for NBA people is they don’t have much else on which to base an evaluation of Sharpe. His last productive high school season came as a junior when he averaged 24.1 points and six rebounds.

Sharpe did not play in NBA combine games this week. He left Chicago on Wednesday. The Herald-Leader was told that his intent all along was to go through combine measurements (6-foot-11 1/2 wingspan, 4.8% body fat), participate in team interviews and conduct the private workout.

Kentucky fans probably could relate to what could be termed as a premature departure. The hype surrounding Sharpe, the No. 1 player in his high school class, inflamed great expectations. But after arriving at UK in January, he was a practice player. The stated plan was for Sharpe to be Kentucky’s star player next season. But then projections of being one of the first picks in the June 23 NBA draft changed everything. Sharpe has until June 1 to make his stay-or-go decision official but that decision seems self-evident.

TyTy Washington, who is participating in the NBA combine, had a practical bottom-line reaction to Sharpe’s basketball trajectory.

“If I had a child and they say he’s top five and won’t have to play a minute of college, we’re going to take that route,” Washington said during a combine interview session Thursday.

Washington acknowledged that some UK fans could be unhappy.

“We all know at the end of the day, the game of basketball at the highest level is a business. So, you know, you’ve got to do what’s best for you and yours. Not so much for everybody else. If that’s what Shaedon feels is best for him and his, then I’m going to support him all the way because that’s my brother.”