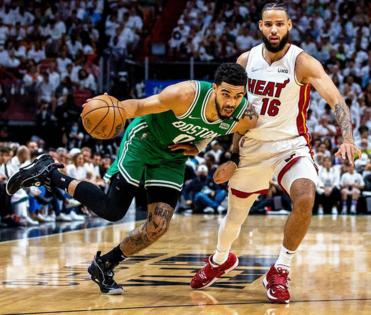 MIAMI — There is nothing subtle or soothing about this Heat-Celtics Eastern Conference Finals.

There is only mass destruction, the type of devastating damage that leaves you dazed and wondering “What the heck just happened?”

A third-quarter Heat tsunami in Game 1 was followed by a stunning Celtics first-half avalanche in Game 2, a 60-21 Boston burst from which the overwhelmed Heat never recovered.

This 127-102 Celtics’ beat-down on Thursday night at FTX Arena tied the series at 1-1, with the next two games in Boston on Saturday and Monday nights, both on ABC.

Jimmy Butler continued his exceptional postseason with 29 points on 11 for 18 shooting, with six rebounds and three assists.

But aside from 14 points from Gabe Vincent, there wasn’t nearly enough support on a night that the Heat continued its poor postseason three-point shooting (30.3 percent/10 for 34).

Miami lost for the first time in eight home playoff games, as Boston embarrassed the Heat’s highly-rated defense on one end and suffocated them defensively on the other.

To make matters worse, the Heat lost P.J. Tucker to a left knee contusion in the third quarter, just as Miami was rallying a bit.

Jayson Tatum scored 17 of his 27 in the second quarter, Jaylen Brown scored 24 (with eight rebounds) and Grant Williams added 19.

And the Celtics got a big lift from the return of Marcus Smart from a foot injury that sidelined him in Game 1.