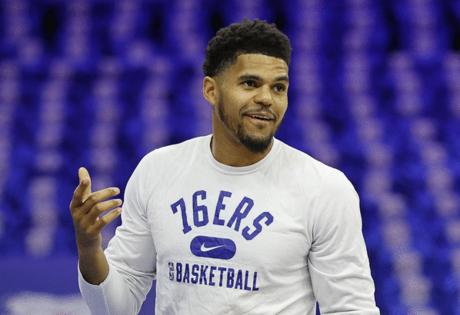 PHILADELPHIA — Daryl Morey is back where he started. Not really. But, kind of.

When the Sixers president arrived in town in October 2020, he inherited a team that many swore had nowhere to turn. Two years of haphazard decision-making had left the franchise with little apparent room to wiggle free from an ill-fitting roster that was coming off a first-round sweep to the Boston Celtics in the NBA bubble. After watching Jimmy Butler lead the Miami Heat to the NBA Finals that year, the Sixers found themselves reckoning with a future that was hamstrung by the four-year, $109 million contract they’d given Al Horford after trading Butler’s rights to Miami. Suddenly, it looked like there was no way out.

The lesson of that offseason is the same as this one. There’s always a way, particularly when the goal is to move from a disjointed roster to one that makes a little more sense. Two years ago, the solution arrived in two steps. First, the Sixers traded Josh Richardson to Dallas in exchange for Seth Curry. Then, they attached Horford’s contract to a 2025 first-round pick and a couple of former second-round picks and sent the package to Oklahoma City while netting Danny Green in return.

The important thing to remember is how well the reshuffling worked. The Sixers parted with two starters, a combined 61 minutes per night, a combined $38.5 million in salary, and a first-round draft pick, and they went from getting swept in the first round to the No. 1 overall seed and a Game 7 loss in the second round. They did it by adding two starters whose skill sets better complemented the three incumbents, and at a combined price tag of about $23.2 million.

The important difference between then and now is that the Sixers are starting from a better place. That’s a tough thing to acknowledge less than a week after the season ended the same place it did a year ago. But anybody who does not see a path forward for this roster is guilty either of a lack of imagination, a lack of basketball knowledge, or a self-destructive amount of cynicism. It’s a fair question whether Morey can identify and execute that path. But it is there.

1) We know that James Harden and Joel Embiid can work

Let’s think back to the biggest questions about Harden when he arrived. What matters more: Harden being Harden, or Harden winning? Is he a self-centered weirdo or a guy who can fit into a team? Can he play second fiddle? Is he willing to be the kind of player he needs to be to accommodate a ball-dominant big like Joel Embiid? Those were the questions. Look them up, and then think about the fact that he answered them all in the best possible manner. No doubt, Harden’s physical condition was jarring. From his inability to maneuver in the paint and finish at the rim to his lack of quick-twitch lift on his step-back jumper, Harden too often looked 32 years old going on 39. The important thing is he still showed he can provide unique value. The Sixers are far better off wanting him to shoot more than they are wishing he would shoot less.

Here’s my read on Harden after watching and listening to him for three months: The guy wants to win, and he is acutely aware of what he needs to do in order to facilitate the process of winning. He is the anti-Russell Westbrook in terms of self-awareness. He understands that he was not physically capable of doing things the way he did them in Houston, and that’s why he did not try to do them that way. The guy understands team basketball. He feels the flow. He’s an elite passer, and has an elite handle. He has a game that will age well. The big unknown is whether he can get his body to a point where, at worst, it will slow its decline.

2) We know what Harden and Embiid need around them

They have one piece of it: a secondary ballhandler who can score in isolation and is elite in catch-and-shoot situations. I’m with Doc Rivers on Tyrese Maxey: He’s earned the benefit of the doubt when it comes to projected improvement. The strides he made with his jump shot and his finishing at the rim were remarkable. Really, a lot of his improvement will come from the natural process of the game slowing down. That’s all it is. The game needs to slow down. That happens naturally. Not for everybody, but it is already happening for him, and it will continue to do so. Combine that with his work ethic, and you’re bound to see a better passer, a better isolation playmaker, and a better team defender.

Given the defensive limitations of a Maxey-Harden backcourt, you need the two players beside them to balance that out. You also need them to shoot 38-40% from the corner with relative consistency. And it would be helpful if they were good passers. You also need at least one similar player on the bench, plus another who can handle the ball and provide some scoring punch.

Frankly, you need a lot of the guys Harden had around him in Houston.

3) We know Tobias Harris is not one of those guys

Neither are Shake Milton, Matisse Thybulle, or Furkan Korkmaz. But Harris is the big swing piece. It’s hard to see a way for the Sixers to acquire the four or five complementary players they need without trading Harris directly for them or clearing his contract in order to sign them in free agency. While Harris clearly gave this version of the Sixers more value than Horford gave that 2019-20 squad, he remains in a no-man’s land of sorts. The Sixers either need to find an apples-for-oranges swap that leaves both teams with more of their desired fruit, or they’ll need to attach a valuable enough asset to convince a rebuilding team to take on his contract. If Harden agrees to a contract extension at less than his current player option — say, at $30 million a year — the Sixers could conceivably give themselves $30 million-plus to play with in free agency.

In sum, the big dominoes to fall are as follows: 1) Get Harden’s cap number as low as possible while minimizing long-term risk. 2) Trade Harris. 3) Figure out if there is any trade value to be had in Thybulle and/or Jaden Springer. 4) Head into free agency with whatever supporting cast and spending power remains.

It’s not as exciting as star-hunting. But, hey, where did that get them?