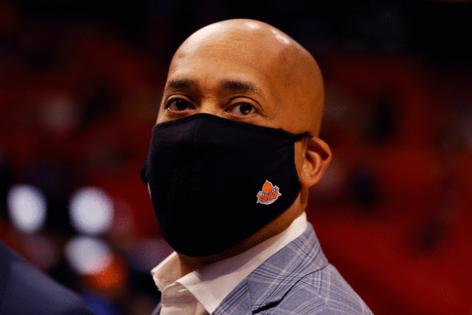 The franchise will pick 11th, the spot they were slotted before Tuesday’s draft lottery drawing, failing to move up for a depressing 18th consecutive time in the lottery. It’s a streak that started after the Knicks won the Patrick Ewing sweepstakes in 1985.

The Orlando Magic won the lottery. The Knicks entered the drawing with a 9.4% chance of cracking the top 4.

The 2022 draft class is considered top heavy with four top prospects — Auburn’s Jabari Smith Jr., Gonzaga’s Chet Holmgren, Duke’s Paolo Banchero and Purdue’s Jaden Ivey — now out of Leon Rose’s range. At No. 11, the Knicks’ options are difficult to predict five weeks before the draft (although we take a stab below). They could also trade the pick and have been linked to Utah’s Donovan Mitchell, who would cost Rose’s entire asset chest to get out of Utah.

The Knicks were represented at the lottery dais by team executive William Wesley, aka ‘Worldwide Wes,’ who took a front-and-center role in Chicago after a career out of the spotlight as a backroom operator.

Developing a mythical status as a power broker and even referenced in songs by Drake and Jay-Z, Wesley has never spoken publicly on camera. Whether intended or not, Wesley’s presence served as a reminder (or introduction) of his connection to the Knicks, even though people around the league doubt the 57-year-old carries much sway with today’s players.

Wesley, whose official role is Executive Vice President, nodded in approval when NBA Deputy Commissioner Mark Tatum announced the Knicks at No. 11.

Wesley’s rise as a networker spanned relationships with Michael Jordan, Allen Iverson and the 2004 champion Detroit Pistons, but that was many years ago — before Wesley’s falling out with LeBron James over a decade ago — and he has yet to transfer his connections into a star arriving at MSG.

In the secret and enclosed drawing room Tuesday, where the Ping-Pong balls were pulled, the Knicks were represented by executive Brock Aller, the team’s number cruncher and asset manager.

It wasn’t a lucky combination. Tuesday represented the 11th time the Knicks stayed in their lottery slot. They’ve fallen back 10 times.