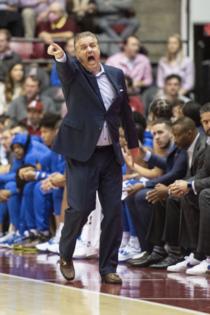 The Kentucky basketball roster for 2022-23 is pretty much set. John Calipari said so a couple of weeks ago when appearing on a Louisville radio show. The UK coach said he expected to have 10 scholarship players for next season. No more than 11.

Though currently testing the NBA Draft waters, Jacob Toppin is expected to return. Keion Brooks said Monday he’s “all-in” on the draft. Calipari indicated UK had an unannounced commitment from another player. As it turned out, that was Adou Thiero, a three-star prospect out of Pennsylvania with upside.

There is the Shaedon Sharpe situation. It’s difficult to find anyone, however, who doesn’t believe last year’s heralded midseason enrollee, who never made it into a game in a Kentucky uniform, will stick with the NBA Draft.

So, what do we have here? If this is indeed the Kentucky basketball team for 2022-23, what do we think? Good? Bad? So-so? Did Calipari accomplish what he needed to pull Big Blue Nation out of its deep, dark funk from that first-round NCAA upset loss to No. 15 seed Saint Peter’s?

Let’s start with the positive, i.e. the return of the one-and-only Oscar Tshiebwe. You recall his 17.4 points and nation-leading 15.2 rebounds per game. Unanimous national player of the year. True, there’s a reason the 6-foot-9 center did not jump to the pros. His game still needs work. To UK’s delight, however, Tshiebwe chose to put in the work while still a Wildcat.

Oscar won’t go it alone. Point guard Sahvir Wheeler is back. The 5-9 spark plug led the SEC in assists (6.9 per game) last season, but his game is also a work in progress. Wheeler shot 30.8% from three-point range. He committed key turnovers down the stretch against Saint Peter’s. A second year in UK’s system should pay dividends.

That trend is encouraging. Next year will be Tshiebwe’s third in the program — two-and-a-half technically — and Wheeler’s second. It’ll be the third for Toppin and reserve center Lance Ware, and the second for forward Daimion Collins. That’s similar to what national champ Kansas and runner-up North Carolina boasted last season — experienced players with institutional knowledge, complemented by key transfers.

For Kentucky, the lone transfer from the portal is Antonio Reeves, the 6-6 guard who averaged 20.1 points per game last season for Illinois State. Reeves also shot 39% from three-point range. He could be the plug-and-play replacement for the departed Kellan Grady.

Or will that be CJ Fredrick? After transferring from Iowa, Fredrick missed last season with a leg injury. The former Covington Catholic star is a dead-eye shooter — 47.4% from three-point range his final season at Iowa — who averaged 10.2 points as a freshman and 7.5 points as a sophomore for the Hawkeyes. He’s a newcomer without being new.

Then there are the freshmen. The 6-4 Cason Wallace is No. 8 in the latest 247Sports player rankings for 2022. The 6-6 Chis Livingston is No. 10. As we’ve learned over recent years, top-10 player rankings do not guarantee immediate success. Still, the two should be major contributors.

When it comes down to it, however, the keys will be Toppin and Collins. Whatever you want to call it, that big forward/stretch four spot has become increasingly important in college basketball. Brooks and Toppin filled that role last season. Looks like it’ll be Toppin and Collins this time around. Toppin has the experience. Is he ready to take the next step? Collins has the physical gifts. Is he ready to capitalize?

ESPN’s Joe Lunardi has UK as the No. 1 overall seed in his ridiculously-early bracket projection for the 2023 tournament. That seems high to me, even with Oscar returning. But with all the player movement this offseason — Arkansas has 11 new players; six freshmen and five transfers — those way-too-early projections are fun but never more meaningless. Who’s to know?

You could say the same about a mid-May breakdown of the Kentucky basketball roster. Then there’s this: Madness will be here before we know it.