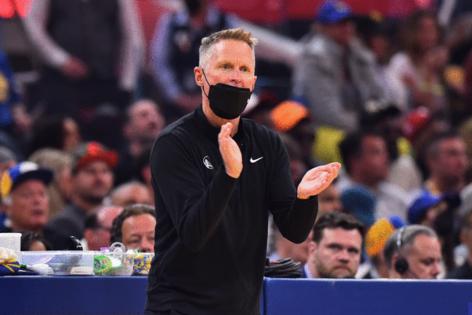 As Warriors coach Steve Kerr was driving to work ahead of Game 4 of the Western Conference semifinals series, his focus wasn’t on the Memphis Grizzlies, but rather on his cough, his congestion, and the cases of COVID-19 that had popped up at the team’s San Francisco facility.

As cases of COVID waned around the country, the NBA made testing for the disease — once mandatory and daily — an effectively voluntary practice. In February, Kerr had, like so many of us, stopped wearing a mask when he was at work, on the sidelines. No one actually likes wearing them.

But the mask was back on for Game 3 of the series on the first weekend in May.

Then, Kerr tested positive for COVID two hours before Game 4. He missed that game, as well as Games 5 and 6 of the series — a Warriors win — and has now recovered from the “mild” case and will be on the sidelines for Wednesday’s start to the Western Conference finals.

“I just felt like ‘I better test,' ” Kerr said, recalling his mindset on the drive to Chase Center. “If I pass this on to the team, I’ll never forgive myself.”

With new COVID cases rising increasing threefold since the start of April, per the New York Times, this disease offers a new threat to not only the Warriors, but the NBA as a whole.

It could absolutely determine the league’s champion in June.

We’ve come a long way since the beginning of the pandemic in this country — a moment that cannot be officially pinpointed but is often associated with the NBA and Utah Jazz center Rudy Gobert’s positive test in Oklahoma City, which shut down the league for months.

We are, of course, well past the point of shutdowns and bubbles now. Arenas are full, after all. But while this latest COVID surge doesn’t compare to the peaks of the original Delta or Omicron variants in scale or severity, this latest go-around with the disease is not to be overlooked.

The league postponed 11 games this season, the last being the Warriors’ game against the Nuggets on Dec. 30 — a contest where Denver had six players and three coaches in the league’s health and safety protocols. NBA rules require eight healthy players to play a game in both the regular season and the playoffs.