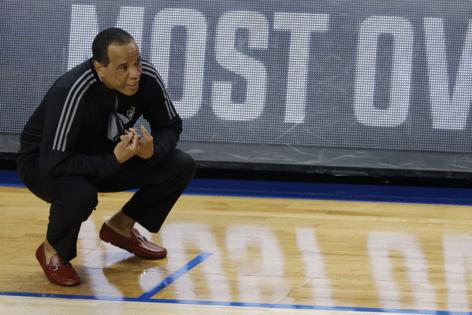 FERNANDINA BEACH, Fla. — Almost five months after he became the fifth commissioner in ACC history, Jim Phillips stood in front of a crowded hotel banquet room in Charlotte and emphasized the single priority most critical to the league’s future. It was Phillips’ first major public appearance in his new role, and he was speaking at the ACC’s annual preseason football kickoff.

“As I’ve stated since my first day as ACC commissioner,” Phillips said then, “football must be number one priority for us — for all of us: our schools, the league, ACC Network, our partners, coaches.” He spoke of the need “to ensure that ACC football has the mindset of 24/7, 365, and we’re working together to further elevate football in the ACC.

Phillips maintained that the league’s overt prioritization of football would “not be at the expense of our other 26 sponsored sports,” and he argued that “ACC basketball, which we all love, has been and will continue to be the paradigm for excellence.” Yet his message was clear enough: the era of the ACC’s reliance on its basketball roots had long ended; football was king, or at least it had to be.

The contrast between the league’s basketball-rich past and its uncertain future in a football-first college athletics world was as clear as ever last week during the ACC’s annual spring meetings on Amelia Island, a posh enclave of tree-canopied streets and oceanfront resorts near Jacksonville, Florida. For four days inside the Ritz-Carlton, long home to these meetings, Phillips met with ACC coaches and athletic directors about challenges facing the league.

The future of football divisions, and scheduling, became one of the newsier topics. So, too, was talk of the steady drumbeat of larger problems surrounding college athletics, those related to pay-for-play under the guise of name, image and likeness deals; the rumblings of inducements that have sent football and basketball players rushing into the transfer portal. ACC men’s basketball coaches, meanwhile, spent a long time discussing something that once came automatically: respect.

Until the conference redeemed itself during the NCAA tournament, it plodded through a regular season in which it became something of a national punching bag. The perception of a “down” ACC took hold, and the league’s coaches last week discussed ideas about how to improve the conference’s image. It was a striking revelation, given the long-standing cachet of ACC basketball.

Last week, the conference invited Dan Gavitt, the NCAA’s senior vice president of basketball, to help its coaches understand the perception problem — “the narrative during the year,” as Phillips put it, that the league was weak. “We were trying to understand (that) a little bit,” Phillips said, acknowledging that the league’s relatively poor non-conference performance, early in the season, created a season-long perception that the ACC found difficult to shake until March.

There, in the NCAA tournament, league teams went 14-5 — the best record of any conference — and Duke and North Carolina played each other in a national semifinal for the first time. The Tar Heels’ 81-77 victory in New Orleans became an instant classic and, in the moment, a Duke-UNC game in the Final Four felt like an elixir for a sport in desperate need of a boost.