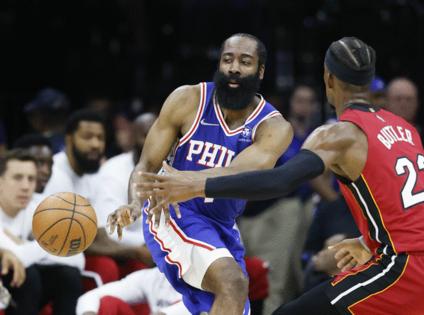 That led to the Sixers’ president of basketball operations being asked if there’s multiple levels Harden can elevate to than what he’s shown the past couple of months with his new team or should people adjust their expectations?

The expectation when Harden arrived in Philadelphia was that he would be an elite scorer to complement Joel Embiid. However, Harden turned out to be more of a reliable facilitator who often struggled to shoot the ball and score.

Morey added that he’s excited for the Sixers’ coaching staff to have a whole offseason to work with players and come up with the best plan for the roster.

“Obviously, our circumstances having it all come together in February makes it very difficult to try to figure out how to use the word unlocked again,” he said, “unlock all the different skills of players and how they can work together.”

Morey was right about the Sixers not having the ideal time to work with Harden after he was acquired in a Feb. 10 trade from the Brooklyn Nets. And the 2018 MVP and three-time scoring champion didn’t play until Feb. 25 because left hamstring tightness delayed his Sixers debut.

But the executive didn’t answer the question.

Asked a second time, Morey said, “I think we all know he’s a very skilled player and we’ll figure out how to use him.”

The second non-answer led to another question about Harden, who was an elite scorer as a Houston Rocket: When you look at Harden, do you see him more of a facilitator than he was as a Rocket?