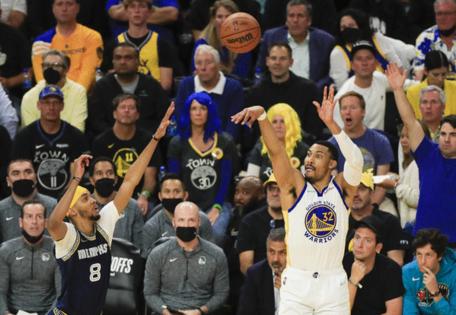 SAN FRANCISCO — Coach Steve Kerr on Sunday said he’s “hopeful” that Otto Porter Jr. will be cleared to play at the start of the Western Conference finals.

Porter has missed the last game and a half due to soreness in his right foot that flared up during the Golden State Warriors’ Game 5 blowout loss Wednesday night. Porter had done some court activity during shootaround Friday, including agility exercises and shooting.

Sunday was a light practice for the Warriors, with the high-minute players staying mainly off the court, while the lower-minute men played in a scrimmage. Porter rode a stationary bike during practice, but didn’t do anything on the court, according to Kerr.

“I talked to him, he said he’s feeling better,” Kerr said of Porter. “We’re hopeful he’ll be able to play Game 1.”

Mike Brown, who served as the Warriors head coach in Kerr’s absence, recently said he wasn’t sure whether Porter’s foot discomfort was the result of one play in particular or the wear and tear of the postseason.

Porter and his aggressive rebounding had been key to the Warriors’ success in the first four games of the Western Conference semifinals series against the Grizzlies. He averaged 6.2 points and 4.6 rebounds in five games off the bench in the last series.

Porter wasn’t able to contribute during Game 6 Friday night at Chase Center, but the Warriors managed to fend off the young Grizzlies to advance to the Western Conference finals for the first time in three years. The Warriors will play the winner of the Phoenix Suns and Dallas Mavericks series, which will be decided in Game 7 Sunday night. That series begins Wednesday.

Porter has dealt with a series of injuries throughout his career, but the flare-up of soreness in his right foot appears to be a new issue. The last time he had an injury to his right foot was in 2018.