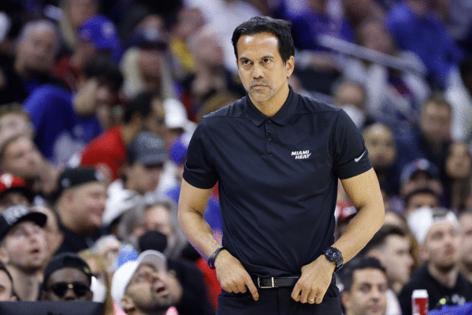 The Miami Heat finally know who stands between them and a trip to the NBA Finals.

Whether the Celtics or the Bucks had won, Heat coach Erik Spoelstra said it wouldn’t make much difference to the top seed in the East.

“At this point, whoever it is, both sides are familiar with each other just from regular season and how much we’ve played against each team in the playoffs,” Spoelstra said.

The Heat and Celtics are no strangers to each other. The Heat made it past the Celtics in the Eastern Conference finals in 2020 before falling to the Lakers in the NBA Finals in the COVID-necessitated bubble postseason near Orlando.

“To be able to play against this team now, similar kind of makeup where they have Bam and Jimmy and the physical guys. They added PJ,” Celtics forward Grant Williams said. “They have a lot of toughness on that team, and they shoot the ball well. We’ll have to be able to lock in and focus in on our game plan against them and the scheme. ... It’s going to be exciting to be able to run it back against them.”

Miami played Boston three times in the regular season, dropping two of three games. The Heat won the most recent matchup on March 30.

Celtics star Jayson Tatum has averaged 17.7 points, 8.3 rebounds and 4.3 assists against the Heat in those three games this season. In 15 career games against Miami, Tatum averaged 20.3 points, 6.5 rebounds and 3.3 assists.

“Just experience,” Bam Adebayo said. “I feel like that’s the biggest thing. You start to figure out a guy’s tendencies after playing them year after year. And then you see them improve or go the other day, depending on his work ethic. You watch guys progress in this league after two, three years of going against each other. You kind of get a feel for their game and how they play.”

Miami has the advantage over Boston by virtue of having time to recover. Miami ended its series against Philadelphia with a win in Game 6 on Thursday, giving the Heat four full days to rest and prepare for the conference finals. Meanwhile, the Celtics will have to regroup and travel to Miami for the start of the next series on Tuesday.