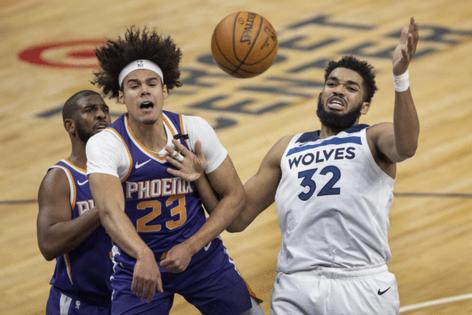 MINNEAPOLIS — Karl-Anthony Towns' girlfriend, Jordyn Woods, posted a photo Saturday of Towns on her Instagram story that set off some concern among Minnesota Timberwolves fans on social media.

The photo was of Towns on a couch but with what appeared to be a brace on his right leg.

It turns out Towns has multiple injuries he is trying to heal.

ESPN reported Towns underwent stem cell treatment and platelet-rich plasma injections in both knees, his left ankle, his left wrist and a finger on his right hand. Towns played through these injuries late in the season.

He got the procedures done in an attempt to avoid surgery and be healthy by training camp.

Towns played in 74 of 82 games this season in helping the Wolves reach the No. 7 seed in the Western Conference.