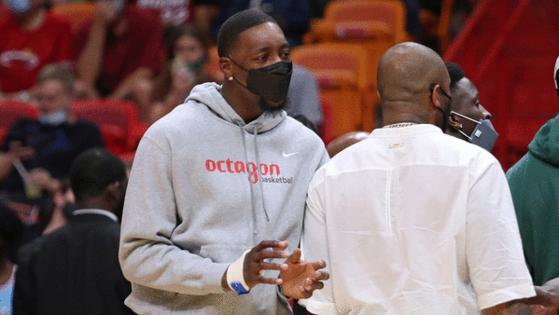 Aligning to the initial timetable offered by the Miami Heat, center Bam Adebayo appears to be trending toward a return next week from thumb surgery.

Adebayo underwent surgery by Dr. Steven Shin to repair a torn Ulnar Collateral Ligament in his right thumb on Dec. 6 at the Kerlan-Jobe Surgery Center in Los Angeles.

The day after that procedure, the Heat said Adebayo was expected to miss four to six weeks.

Monday’s game against the Toronto Raptors at FTX Arena will be six weeks from the surgery.

ESPN reported Friday that Monday has now been targeted for the return.

Adebayo was injured in a Nov. 29 home loss to the Denver Nuggets. He recently rejoined the Heat for road trips and has been observed shooting without a splint at shootarounds, practices and before games.

The Heat entered Friday’s game against the visiting Atlanta Hawks at 13-7 in Adebayo’s absence, with rookie Omer Yurtseven moving into the starting lineup and thriving in the interim.

A Monday return would come during a stretch of eight of nine Heat games at FTX Arena, allowing for additional practice time to acclimate to what has become a reshuffled rotation in Adebayo’s absence.

The Heat in Wednesday night’s victory got Dewayne Dedmon back after the veteran reserve center had missed seven games with a knee sprain.

Amid the absences of both Adebayo and Dedmon, the Heat also had utilized Udonis Haslem, KZ Okpala and starting center P.J. Tucker at center. In addition, emergency 10-day addition Chris Silva, signed amid a rash of Heat players entering NBA health-and-safety protocols, also had taken recent minutes in the middle.

The Heat have not had their three core players of Adebayo, Jimmy Butler and Kyle Lowry in a game together since the Nov. 27 road victory over the Chicago Bulls.

“I’m happy to get Bam back soon and Jimmy back,” swingman Max Strus said after Friday morning’s shootaround. “Those guys carry us. So having the talent out there like that, it’s going to put our best team on the floor at all times and put our best foot forward. So I’m excited to get those guys back.

“And all the young guys that have been contributing are ready to sacrifice whatever role we have to and help this team win at any cost.”

Forward Caleb Martin said there is plenty to be said about even better days ahead.

“Obviously it’s going to be a good day when everybody gets back at the same time, and just continue to work things out and continue to build that chemistry,” he said. “It’s still crazy to think that we’re still building chemistry at the halfway mark.”