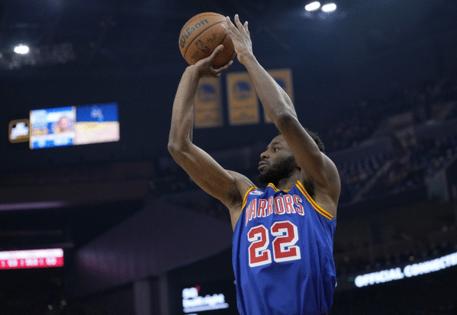 A 126-95 win on Monday at Chase Center over an Orlando Magic team flirting with last place in the Eastern Conference gave Stephen Curry and the Warriors a little breather following a tough 1-2 skid against the first-place Phoenix Suns and scrappy San Antonio Spurs. The Warriors move to 20-4, tied with the Suns for first in the Western Conference.

The struggling Portland Trailblazers visiting on Wednesday could provide a nice cushion for the Warriors heading into a tough road trip with a pair of back-to-backs on the horizon.

The Warriors took advantage of a Magic team with a 112.1 defensive rating on the road ranked 24th out of the 30 NBA teams and 111.4 rating overall. Andrew Wiggins drained a career-high eight 3-pointers — breaking a previous high of seven 3s made against the Sacramento Kings in January of last year. Wiggins went 8-of-10 from 3 on the night. In 30 minutes, Wiggins scored 28 points and upped his 3-point average to 41%, a career high.

Curry set the tone early with an easy 19-point half and four 3-pointers made on five attempts — including a buzzer-beater from the half-court logo to end the first quarter. Chasing Ray Allen’s all-time 3-point record, Curry finished the night with seven made total, now needing 16 3-pointers to tie Allen’s record of 2,973. Curry sat for most of the fourth quarter and finished with 31 points.

As a team, the Warriors shot 50% from 3 with 20 3-pointers made. Nemanja Bjelica shot 2-of-3 from beyond the arc. Jordan Poole had a 12-point game with a season-high seven-assists.