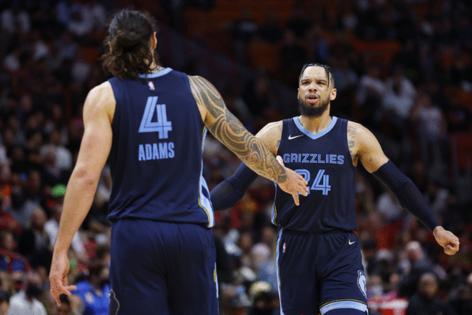 MIAMI — Each team was missing one of its best players, as the Miami Heat played without center Bam Adebayo and the Memphis Grizzlies continued life without guard Ja Morant.

But only one team has found a way to consistently win without its star, as the Grizzlies (14-10) moved to 5-0 since Morant was sidelined because of a sprained left knee with a 105-90 victory over the Heat (14-11) on Monday night at FTX Arena. Miami fell to 1-3 since Adebayo went out with a torn ulnar collateral ligament in his right thumb.

The Grizzlies were in control from the start, as the Heat never led. Memphis entered the second quarter with a nine-point advantage, halftime with an 11-point lead, the fourth quarter with a 15-point lead and pulled ahead by as many as 18 points during the victory.

The Heat turned in a sloppy performance that included a season-high 23 turnovers. The Grizzlies capitalized to total 27 points off of those mistakes.

Heat star Jimmy Butler returned after missing the previous four games with a tail bone contusion, but he was very clearly still not 100 percent. He ran up and down the court gingerly for most of the night, recording 10 points, five rebounds, four assists and three steals in 25 minutes before exiting the game midway through the third quarter after re-aggravating his tail bone injury.

The Heat, which has dropped three straight games at FTX Arena, continues its three-game homestand on Wednesday against the Milwaukee Bucks.

Here are five takeaways from the Heat’s loss to the Grizzlies: