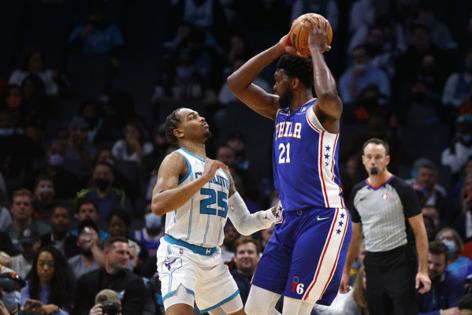 CHARLOTTE, N.C. — For much of the early season, the 76es were the undermanned team with multiple players in health and safety protocols.

Monday night, they eventually prevailed over an opponent in a similar predicament.

Joel Embiid’s 43 points, 15 rebounds, and seven assists propelled the Sixers to a 127-124 overtime victory over the pesky Hornets at the Spectrum Center on a night when Philly exploded in the second quarter, survived Kelly Oubre Jr.’s 35 points, the Hornets’ late rally, and overcame allowing 23 points off 15 turnovers.

The extra period belonged to Embiid, who is beginning to round into dominant form following his bout with COVID-19. He scored or assisted on all eight of the Sixers’ overtime points, including a jumper to put them up 125-122 and an over-the-top feed to Tobias Harris for a dunk to make the score 127-124 with 1 minute, 10 seconds to play.

Charlotte played Monday without star LaMelo Ball as well as Terry Rozier, Ish Smith, Mason Plumlee, and Jalen McDaniels. They were also on the second night of a back-to-back set after winning in Atlanta Sunday night.

Still, Sixers assistant Dan Burke — who fulfilled many of Doc Rivers’ pregame duties Monday while Rivers attended to a family matter — said he felt “a little angst” about facing the Hornets because “they’re a scrappy team, and we can’t lose sight of that.” Charlotte coach James Borrego was bullish about his team entering the game, saying these types of nights were key character builders during the season’s grind.

The Sixers needed to hold off a fourth-quarter surge by the Hornets, when Oubre buried a three-pointer to put Charlotte up 119-116 with 61 seconds to play in regulation. Embiid then drew a foul on the Sixers’ ensuing possession and went 1-of-2 from the line, then hit the game-tying jumper with 29.4 seconds to play. After Miles Bridges missed a step-back three-pointer, Embiid’s misfire off the glass at the buzzer sent the game to an extra five minutes.

After a stellar performance Friday at Atlanta, Embiid kept rolling by making 15 of his 20 attempts from the floor.

Before his monster finish, Embiid did a large chunk of his damage during his second-quarter shift, taking advantage of the mismatch against P.J. Washington.