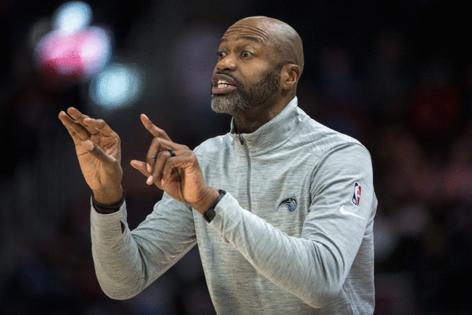 Before they were in their current respective positions, Mosley and Silas spent time together as assistant coaches for the Dallas Mavericks on current Indiana Pacers coach Rick Carlisle’s staff.

Silas said Mosley was “one of the reasons” he joined the Mavericks in May 2018.

“We spent two years together in Dallas, but we’ve known each other for basically our whole careers,” Silas said ahead of the Magic’s 118-116 loss to the Rockets on Friday, which kicked off a five-game road trip against Western Conference teams for Orlando (5-19) and will continue with a matchup against the Golden State Warriors on Monday at the Chase Center in San Francisco.

After trailing 114-101 with 4:09 left in the game, the Magic went on a 15-2 run led by Cole Anthony’s eight points in the final four minutes to tie the game at 116 after Mo Bamba was assisted by Franz Wagner on a dunk with 16.7 seconds left.

Rockets guard Eric Gordon made a five-foot floater over Bamba and Wendell Carter Jr. to give Houston a two-point lead with 1.6 seconds left.

Anthony (26 points on 10-of-20 shooting with seven assists and five turnovers) got open behind the 3-point line on an inbound pass from Wagner but missed the potential game-winning shot to secure the win for the Rockets (6-16) and Silas in the first matchup between Mosley and his former co-worker.

Mosley added that he’s known Silas since he got his first assistant coaching job with the Denver Nuggets in 2005.

“I don’t know who had left at the time, but we had an opening there,” Mosley recalled, with Silas spending 2010-18 as an assistant coach with the Charlotte Hornets/Bobcats. “Silas was in between making a decision in taking a job, whether it was with us or another team.

So when Mosley took on his current role with the Magic for his first head coaching job, Silas made sure Mosley knew he had his support.

“He was always encouraging me,” Mosley said. “We did have a level of communication that allowed me to see exactly what it’d be like stepping one seat over.”

With both Mosley and Silas being “one seat over” compared to where they were in Dallas, Friday provided a moment they both relished.

“We would be in the locker room before games talking about this moment [on Friday] when we’re going against each other as head coaches,” Silas said. “Super proud of him — the work he does, the energy he brings whether it’s a practice or a game. He’s going to be around for a long time.”