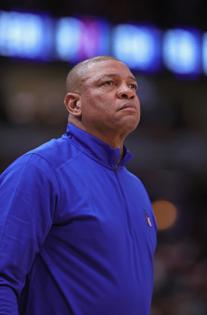 ATLANTA — Georges Niang had a statement to make.

While lacing up his sneakers for shootaround, eight hours before Friday night’s game at Atlanta, the 76ers power forward yelled to a reporter “We’re about to get rolling here. Just make sure you tune in!”

He suggested that the reporter be locked in when the Sixers turn things up. Niang knew the reporter was fully aware of Sixers losing nine of their last 12 games. But with most of their players back, including franchise cornerstone Joel Embiid, Niang had plenty of reason to be optimistic.

“It’s a work in progress,” he said. “We’re getting everybody back and figuring things out. I think we have a good stretch coming out for us.”

Well, that stretch is starting with a 98-96 victory over the Hawks.

The Sixers improved to 12-11 heading into their two-game series against the Charlotte Hornets at the Spectrum Center on Monday and Wednesday. Philly was without power forward Tobias Harris, who was out with an illness.

And Niang, who had 13 points while starting in place of Harris, was a prophet.

For a while, the Sixers looked like a team that couldn’t get over the hump.