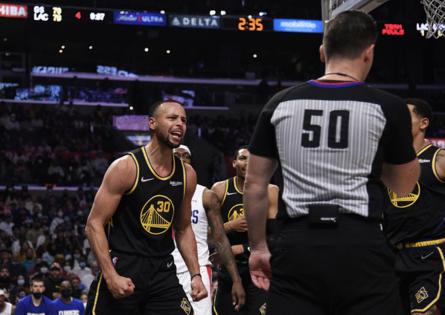 PHOENIX — About 20 games into a season is when a team starts to establish an identity, according to Golden State coach Steve Kerr, and this year's Warriors are no different.

"We're obviously a defensive-minded team. Everything comes off of our defense," Kerr said. "The team has definitely taken on a really good identity and has a good sense of itself."

The Warriors' showdown Tuesday in Phoenix doesn't only pit the teams with the NBA's two best records against each other; it also features two of its top three defenses. Golden State's tour de défense hits its second city after toppling the Clippers, No. 2 in defensive rating, on Sunday.

Their defensive success is what has fueled the league's top-scoring offense. The combination of the two has allowed them to run out to the NBA's best record and one of the best starts in franchise history, at 18-2, entering Tuesday.

But, as Draymond Green said recently, "half the people don't know what the hell they're looking at," when they talk about defense. So let's dissect it.

The evolution of Steph Curry

Effort has never been the problem for Curry defensively, if there ever was one.

If anything, he used to be too overzealous on defense. Such a frequent violator of the reach-in, he used to draw the ire of Green and the coaching staff so often that he eventually knew it was coming.

"We'd used to harp on him, like, 'Yo, stop reaching, stop reaching,'" Green recalled. "It got to the point where he would reach and be like, 'Ah' as soon as he'd do it."

Curry has become a master of the passing lane, exhibited most recently with eight deflections, resulting in six steals, against the Clippers. The Warriors are tops in the league in takeaways and, likewise, Curry's 1.8 per game are his most since 2017 (and rank ninth in the NBA this season). He's also proven more capable this season than ever of defending opposing point guards in the absence of Klay Thompson, who would normally be tasked with that assignment. And remember that early pair of double-digit rebound games? Well, Curry hasn't quite repeated those efforts but his 5.8 per game are the most of his career.