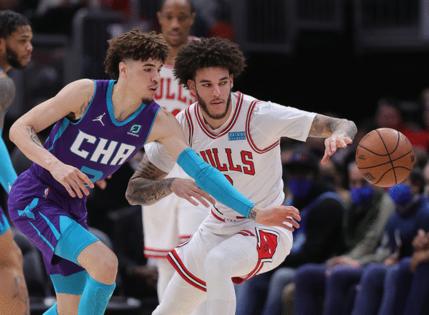 CHICAGO — The idea that this wasn’t just the typical game was evident from the first possession, when the crowd’s murmur slowly increased in decibels as the opposing point guard made the first of many dribble moves against the person who bears a striking resemblance.

Mom and dad were courtside along the baseline, no doubt peering in with pride.

LaMelo Ball danced with his trademark dribbling exhibition against older brother Lonzo, created a path to the lane and knifed his way to the basket. Contorting his wiry 6-foot-7 frame, he tossed up a layup with his left hand, only to watch it bounce off the rim and jump-start a fast break — a scenario Ball could still recall three hours later even if the juicy atmosphere inside the United Center wasn’t something he paid much attention to.

“I’m just hooping,” Ball said. “I think I missed a layup the first play. Yeah, I just missed a little easy one.”

In the third act of The Brothers Ball, this being the first one with Lonzo Ball playing with Chicago, that failed attempt probably sums up Monday night for LaMelo and the Charlotte Hornets. They weren’t overly sharp in their 133-119 loss to the Bulls. Certainly not until the fourth quarter rolled around.

But by then, the family bragging rights belonged to Lonzo, who holds a 2-1 edge in their professional head-to-head careers. Don’t think he didn’t sense a different fervor from the capacity crowd, either.

“Yeah, I mean leading up to the game, it’s always marked on the calendar since he came into the league, obviously,” Lonzo said. “Who the better Ball brother is, this and that. But I play to win.”

So does LaMelo. That couldn’t completely keep him from soaking it all in, though.

“It’s amazing,” LaMelo said. “We always talked about the NBA since we were little boys. So, just going out there and playing against him is always a dream come true for real.”

Plagued by foul trouble early — something he’s curtailed immensely after a rough bout with it early in the season — LaMelo had it going during the Hornets’ late push before they were held off by the Bulls. Through the initial 9:16 of the fourth quarter, he accounted for 66.7% of the Hornets’ points, including 13 created off the six assists he recorded.