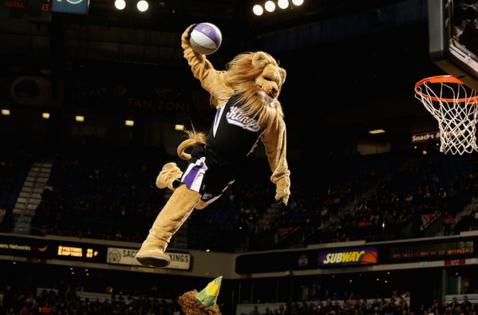 Every so often, NBA voters err so egregiously that their oversights must be contextualized with comparisons to some of the biggest snubs in league history.

Bill Russell was named MVP over Wilt Chamberlain in 1962, Karl Malone won MVP over Michael Jordan in 1997 and Dirk Nowitzki was left out of the All-Star Game in 2001. Those were bad. Historians will decide if this is worse.

A PlayAz.com poll of 1,150 fans across the country found that Sacramento Kings mascot Slamson the Lion is the fifth-worst mascot in the NBA. Picking on the Kings is one thing, but Slamson is one cool cat. Most of these mascots are friendly and fun, but Slamson recently proved to be the ultimate team player when he got down on his paws to help arena workers clean up after a fan barfed on the court.

The controversial outcome of this poll could be met with tremendous skepticism in California's capital city, calling into question the integrity of the voting process. The poll found that Rocky the Mountain Lion (Denver Nuggets), Benny the Bull (Chicago Bulls), Grizz (Memphis Grizzlies), Champ (Dallas Mavericks) and Bango the Buck (Milwaukee Bucks) were the five best mascots in the NBA. Henry the Hawk (Atlanta Hawks), Boomer (Indiana Pacers), Hugo the Hornet (Charlotte Hornets), Rumble the Bison (Oklahoma City Thunder) and Hooper (Detroit Pistons) rounded out the top 10.

Hooper is a horse who hasn't improved his game since coming in at No. 20 on a 2019 list from Hoops Habit. Boomer has been to several NBA All-Star Games, but he's always inhaling hairballs, according to his official bio, and it remains unclear what role he played in the disappearance of Bowser, his former Pacers mascot partner.

Slamson, of course, is a beloved figure who has entertained generations of fans in the Sacramento community. He was born March 8, 1996, in Tanzania, according to his bio. He enjoys reading "The Cat in the Hat" and listening to "Cat Scratch Fever." He attended Lion-el University and was later discovered by Kings scouts while taking a catnap under a tree in Capitol Park.

The Kings did not respond to a request for comment on this story, but their website notes Slamson is a 12-time winner of the NBA's Most Valuable Cat award. He generates more than 12 million smiles per year and averages 338 hugs per appearance, more than Bango the Buck and Henry the Hawk combined. Hooper can't match those numbers either, as no one has smiled at a Pistons game all season.

Slamson is rumored to live behind the bleachers and is known for his legendary work ethic. He rollerblades, walks on stilts, orchestrates a symphony, and he's a great dancer. He can run the floor, shoot from halfcourt and dunk off of trampolines.

Fans have seen Slamson make no-look, reverse halfcourt shots with one hand, throw an alley-oop off the glass to Santa Claus and repel down a Yosemite mountainside to get people to follow the Kings on TikTok. One time, he took on Giannis Antetokounmpo, Robin Lopez and the rest of the Bucks when he was jumped in a wild scene outside the visitor's locker room.

Slamson symbolizes royalty as the king of the jungle, but he's also willing to get his hands dirty. He proved that during a Nov. 20 game against the Utah Jazz when he donned a HAZMAT suit and grabbed a couple of towels to mop up the mess after a fan puked on the court at Golden 1 Center. Rocky the Mountain Lion and Benny the Bull never had to do anything of the sort.

The most average mascots in the poll were Moondog (Cleveland Cavaliers) at No. 13, Chuck the Condor (Los Angeles Clippers) at No. 14, G-wiz (Washington Wizards) at No. 15, The Raptor (Toronto Raptors) at No. 16 and Clutch the Bear (Houston Rockets) at No. 17.

The worst mascots, after Slamson, were Lucky the Leprechaun (Boston Celtics) at No. 24, Go the Gorilla (Phoenix Suns) at No. 25, The Coyote (San Antonio Spurs) at No. 26 and Mavs Man (Mavericks) at No. 27. The Brooklyn Nets, Golden State Warriors, Los Angeles Lakers and New York Knicks do not have official mascots.