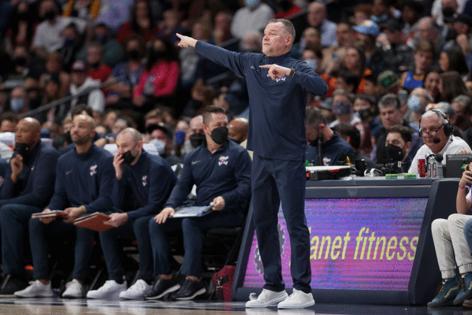 Nikola Jokic’s brothers did, in fact, show up at FTX Arena on Monday for the Miami Heat’s rematch with the Denver Nuggets, but the first meeting between the two since they nearly brawled Nov. 8 wound up being what Erik Spoelstra promised.

“Nothing’s going to happen,” the coach said. “This is about basketball.”

It was just a basketball game, albeit one with the Jokic brothers seated behind the Nuggets’ bench, and Denver cruised past the shorthanded Heat for a 120-111 win to snap a six-game losing streak. The Nuggets led 63-43 at halftime with Jokic, who was the subject of Miami’s ire for his cheap shot on post player Markieff Morris in Denver, going 7 of 8 from the floor and nothing resembling a scuffle, kerfuffle or fracas.

The star post player, who had missed the last four games with a wrist injury, finished with 24 points, 15 rebounds and seven assists while hearing boos from start to finish.

With 24 points, star post player Bam Adebayo was the only Heat player to crack 20, as star forward Jimmy Butler and guard Tyler Herro, the team’s two leading scorers, were sidelined by injuries. Miami only cut the second-half deficit to single digits on a meaningless buzzer beater. Tensions never flared enough for any sort of shenanigans to occur.

Earlier this month, Jokic took a hard foul from Morris in the fourth quarter of the Nuggets’ blowout win against the Heat, then retaliated by shoving Morris in the back. Morris had to be stretchered off and still hasn’t played because of whiplash, the two teams had to be separated and Jokic’s two brothers promised on Twitter they’d be in Miami when Denver made the trip there Monday. The NBA suspended Jokic for one game, and fined Morris and Butler for the incident.

On Monday, the brothers strolled into their seats behind the Nuggets’ bench a few minutes before tipoff and didn’t get into any type of altercation with nearby fans. The boos for Jokic pregame were even muted as public address announcer Michael Baiamonte announced the 7-foot Serbian first, then quickly sped along to the next name. When Jokic touched the ball for the first time, the Miami crowd — at least those of the 19,600 who had already found their seats — exploded with a chorus of boos, which kept going sporadically throughout the course of the game, but that was all he had to deal with.

Might it have been different if Butler wasn’t dealing with a bruised tailbone or power forward Udonis Haslem got into the game? Perhaps. Was the Jokic brother’s public announcement they’d be at the game overblown? Certainly, as Nuggets coach Michael Malone pointed out they always go to Denver’s games in South Florida because “Miami is a great city.”

The Heat-Nuggets feud simmered over, just like all NBA feuds usually do.