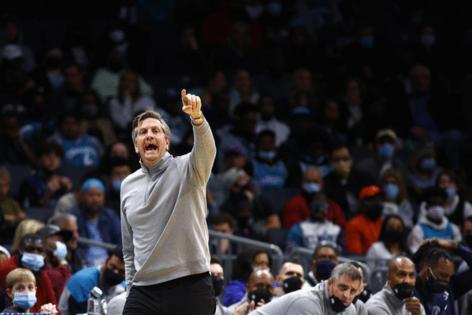 MINNEAPOLIS — The Wolves knew early in the day Jaden McDaniels would miss Monday night's game with Indiana at Target Center with flu-like symptoms. Just before tip-off, Jarred Vanderbilt was scratched, too, for the same reason.

So the Wolves, winners of six of their last seven games, started Monday's contest minus starters Patrick Beverley (groin injury) and Vanderbilt and top reserve McDaniels. The Wolves were without three of their top defenders, a group that regularly provides the energy the Wolves feed off.

Who would make up the slack?

Just about everyone in Minnesota's 100-98 victory.

Naz Reid, scoring 13 off the bench. Karl-Anthony Towns (32 points) and Anthony Edwards (21), who led the second-half charge. And Josh Okogie, whose timely defense flustered the Pacers' Chris Duarte into two technicals and an ejection.

The Wolves saw a nine-point fourth-quarter lead melt away until two free throws by Domantas Sabonis tied the game 94-94 with 1 minute, 14 seconds left.

Down nine at halftime, Karl-Anthony Towns and Anthony Edwards combined for 27 of the Wolves points in a 30-19 third quarter that gave them a two-point lead entering the fourth.

The Wolves continued the run to start the fourth, with defense that had the Pacers — who were called for four technical fouls in the quarter — barking. The Wolves lead grew to seven on Naz Reid's three with 7:11 left. Edward's drive for a dunk pushed the lead to 90-81 with 5:50 left.

The Wolves had problems with the Indiana zone early. And they had a hard time getting back in transition defense after misses or turnovers against a Pacers team determined to run.

The Wolves held a 13-9 lead early when the Pacers — led by five points by Holiday and four from LeVert — went on a 12-0 run to take a 21-13 lead. The Wolves shot just 7-for-21 in the quarter. The Pacers turned five Wolves turnovers into seven points and held an 8-0 edge on the break.

Naz Reid started the second quarter scoring seven points in an 11-6 start to the quarter that pulled the Wolves within one. Moments later, trailing by three, Towns scored, Russell hit a three and Towns scored again in a 7-3 run that pushed the Wolves to a 40-37 lead with 5:25 left in the half on Towns' hook.

But the Wolves couldn't sustain the run because they struggled to get stops. The Pacers – who shot 14-for-26 in the second quarter, just kept rolling. They finished the half on a 20-8 run, scoring the final six points of the half to go up 57-48 entering the third quarter.

Still down nine early in the fourth quarter, the Wolves spent most of the rest of the quarter on the offensive.

With Sabonis on the bench with four fouls for much of it, the Wolves got nine points from Towns in a 16-6 run that put them up 70-69 with 3:15 left on two Towns free throws. The Pacers came back to lead 76-73 before the Wolves ended the quarter on 5-0 run — both initiated by Edwards steals — to take a 78-76 lead into the fourth. Towns scored 16 of the Wolves' 30 points in the quarter and Edwards had 11 with three steals.