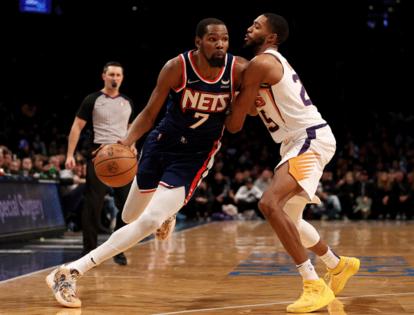 That appeared to be the biggest difference between two heavyweight championship contenders in the Suns’ 113-107 shellacking of the Nets at Barclays Center on Saturday.

At least, that’s the best-case scenario, however far-fetched it may be to count “playing on the back-end of a back-to-back” among an opponent’s advantages.

The Nets looked out of sorts against the Suns, a trend that has been consistent against the NBA’s legitimate championship contenders. The Nets are now 0-5 against such teams, including additional losses to the Milwaukee Bucks, Chicago Bulls, Miami Heat and Golden State Warriors. Their only other loss came against the Charlotte Hornets, and that loss was also ugly.

The Nets had an average margin of defeat of over 19 points against those contenders. They trailed the Suns by as many as 22 before a late-game rally helped decide the game by just on Wednesday. Head coach Steve Nash said after the Warriors loss that his team isn’t in the same category as the league’s elite. Regardless of their conference-best record, that remained the case after a disappointing loss at home to a team on the second leg of a back-to-back.

It remains unclear whether the Nets will be true contenders if they don’t have Kyrie Irving, the star scorer and playmaker whose presence the front office banked on when constructing this team during the offseason. Irving’s absence is less apparent against teams in the middle of the pack, but against teams like the Suns, Bucks, Heat, Bulls and Warriors, it takes more than two star shot-creators to break the defense.

Or maybe two is the magic number and the Nets only have one.

James Harden shot just 4 of 15 from the field and 0 of 6 from downtown for 12 points and was careless with the ball to the tune of seven turnovers. His demeanor powered a first half where the Nets turned the ball over 15 times, and Nets fans in the arena gave their loudest boo to a home player this season after he kicked the ball out of bounds on a crossover attempt early in the fourth quarter when his team was down by 21.

Harden had been playing his way back into form before the Thanksgiving break, but his performances have been inconsistent at best. Fortunately, Thanksgiving leftovers expire on Sunday, before Monday’s game against the cross-bridge rival Knicks.

Kevin Durant scored 39 points on 13-of-28 shooting from the field. He and new Nets starter DeAndre’ Bembry sparked a run at the end of the second quarter, and the end of the fourth quarter.

Those runs proved too little, too late, against a well-oiled Suns team that minimizes mistakes.

The Suns, however, were at full strength: Devin Booker (30 points) and Chris Paul (22) each scored more than 20, and Phoenix got 10 points and 10 rebounds from JaVale McGee off the bench. The Nets had an opportunity to sign McGee as a free agent over the summer, especially if they knew they were moving on from DeAndre Jordan, but they opted to re-sign Blake Griffin and add Paul Millsap.

The Nets played without Irving, but also without Joe Harris, who continues to rehab from a left ankle sprain, and without Nic Claxton, the third-year big man whose absence due to a non-COVID-related illness continues.

Those players aren’t expected to be around for Monday’s rivalry game against the Knicks, but neither are the Thanksgiving leftovers that may have slowed the Nets down against the Suns on Saturday. And if it wasn’t the leftovers, it was flat-out bad basketball.