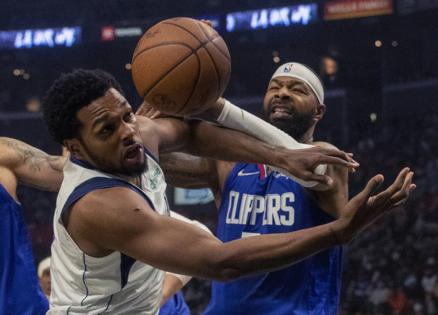 Pointing his finger as he moved around a room that hosts postgame news conferences, the guard surveyed a dozen or so people for their favorite Thanksgiving dishes. He asked reporters. He asked arena workers holding microphones. He asked the team’s public relations employees. Only when he was almost to the door was Jackson asked about his own holiday preferences.

“I ain’t going to lie, my go-tos are stuffing,” Jackson said, “and straight to the pie.”

He departed smiling. The prospect of two days off before Friday’s 12:30 p.m. tipoff against Detroit was appetizing and not only because of the food. After a past week leading scorer Paul George likened to a “roller coaster,” the break was needed.

Road losses on consecutive days in Memphis and New Orleans last week ended a stretch of five games in seven days. Nicolas Batum on Sunday entered the league’s health and safety protocols and could miss most of the team’s six-game homestand. George and a few teammates had already arrived at the team’s Playa Vista practice facility Tuesday morning when a scheduled shootaround was abruptly canceled out of precautions related to the coronavirus. Then, later that night, the ultimate up-and-down: A furious 10-point rally in the fourth quarter’s final 1 minute, 38 seconds to force overtime against the Mavericks when George made a buzzer-beating, tying 3-pointer in the final second.

Coach Tyronn Lue described that final play as “perfect.” The extra period during which they mustered one point, not so much. It was so weird that on two of Jackson’s overtime shots, the ball became wedged between the rim and backboard.

It underscored the highs and lows that could be awaiting the Clippers if they can’t shore up weaknesses that contributed to a third loss in the last four games to leave them 10-8. Leading by 11 in the first half, they failed to put away a Dallas team that made only one of its 14 3-point attempts before halftime through a series of errors that began with a series of forced lobs at the rim that defied Lue’s repeated request to make the easy pass.

Center Ivica Zubac’s behind-the-back assist for a Terance Mann dunk was one of few transition highlights on a night when they made only 12 of 25 inside four feet against the Mavericks, including four such misses in overtime. This season, more than one out of every six Clippers possessions has started from a transition opportunity, the league’s fourth-highest rate. And yet they rank in the league’s bottom six in points per play generated out of transition, according to the advanced statistics site Cleaning The Glass.

Since starting guard Eric Bledsoe averaged 5.6 points on 49% shooting, including 39% from deep, in a five-game stretch that ended Nov. 16, he’s averaged 5.2 points on 36% shooting, including just 11% on 3-point tries, in his last five games. The production doesn’t reflect his defensive contributions, but is symptomatic of a Clippers offense that, already struggling to score easily in transition, can make life hard for itself in the half court, where it ranks 22nd in points per 100 possessions.

“So we’re just trying to pick it up but yeah, I agree, I’m a little frustrated, just because they’re easy baskets that we’re passing up especially with the great defense that we’ve been playing.”

Reintegrating starting forward Marcus Morris and backup center Serge Ibaka after weeks away from the team while recovering from knee and back injuries qualifies as a good problem for a roster riddled at times by attrition. Still, it is a challenge nonetheless. In the case of Ibaka, Lue said he might play all three centers, including starter Zubac and reserve Isaiah Hartenstein, in first halves before going with the hotter hand after halftime. Ibaka played six first-half minutes against Dallas before Hartenstein played all 10 of his minutes after halftime and Lue noted the energy he provided by pointing out his four offensive rebounds.

“That’s been the toughest thing, because Isaiah’s been doing a great job with that second unit,” Lue said. “They kind of had the first 15, 16 games, they’ve had a good chemistry. So it’s my job is to make sure to kind of work Serge back into it slowly but also can’t forget how good Isaiah is.”

It could very well lead to a situation the Clippers never expected upon signing Ibaka to a free-agent deal in 2020: potentially sitting an NBA champion and veteran in high-leverage minutes in favor of a player who had to win a roster spot in training camp. The Clippers outscore opponents by 15.7 points per 100 possessions with Hartenstein on the floor, the team’s second-highest on-off difference behind Luke Kennard, while Ibaka — in a comparatively minuscule sample size — has drawn a minus-4.4 rating.

Morris, who played the season’s first two games before sitting the next 15 because he felt “my movement just wasn’t right” on his knee, was encouraged by his 10 points and 31 minutes.

“Take a month off, I think I looked good myself,” he said. “Shots will come, rhythm will come, I’m a veteran, just felt great to be out there.”