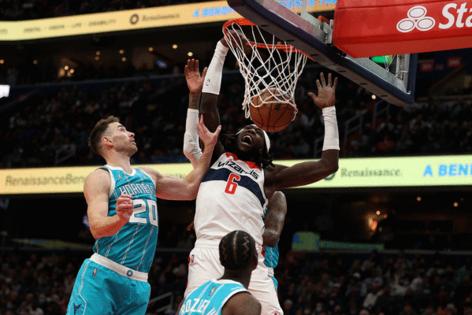 Figuring out precisely which version of the Charlotte Hornets will appear on a given night is almost like a game show.

There’s always a little drama involved right down to the final seconds.

This much is certain: When they are squaring off against one of the league’s elite, they somehow put together some of their most inspiring efforts. That was the case Monday night in their meeting with Washington in D.C., when they staved off the Wizards’ late charge and held on for a 109-103 victory at Capital One Arena.

Here are three things we learned in the Hornets’ sixth victory in their last seven games.

It hasn’t exactly been a banner first month of the season for Terry Rozier shooting the ball.

After getting off to a slow start in part because of the sprained ankle that sidelined him for five games, Rozier is showing a flash here or there of the player everyone has grown accustomed to seeing since he came to the Hornets in 2019. His 32 points were a season-high.

He knocked down a season-best eight 3-pointers, five coming via catch-and-shoot. He’s typically one of the top catch-and-shoot 3-point performers in the league and he had been cold in that department.

Perhaps his most important shot came with 13.2 seconds remaining and the Hornets clinging to a 2-point lead. He pulled up for a 3-pointer with time to spare on the shot clock to push the Hornets ahead 108-103 and seal the victory.

It had to feel good for Rozier to knock down three attempts beyond the arc in the first quarter alone because his percentages are way down and even his bread and butter was deserting him more than usual.

Perhaps Tyrese Martin read his Twitter mentions at halftime and got angry.

After a two-point first half, Martin powered a dominant second half with 25 points to lead the UConn men’s basketball team to a 75-56 Big East ...Read More

NEW YORK — It was the same old story for the Knicks Thursday night:

The starters were brutal, and it took the bench to make it a game.

Julius Randle, Kemba Walker and company ran up a deficit that got to 24 points ...Read More

PHILADELPHIA — People hoping to see the 76ers move Ben Simmons before the Feb. 10 NBA trade deadline might be disappointed.

Sixers President of Basketball Operations Daryl Morey was asked how likely it is for Simmons to...Read More

NEW YORK — Nets star Kyrie Irving has been fined $25,000 for “directing obscene language toward a fan,” the league announced on Thursday.

The incident occurred at the 4:19 mark of the second quarter in Irving’s ...Read More