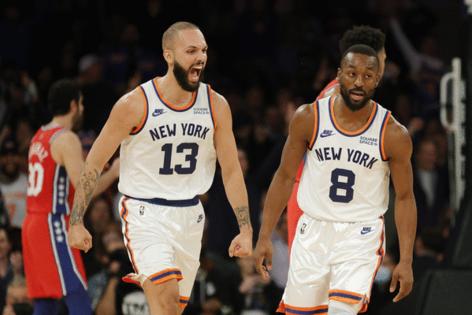 NEW YORK — It was a night of redemption for Kemba Walker and the Knicks.

Walker had entered Tuesday struggling and still searching for a breakout moment with the Knicks, even benched in fourth quarters because Tom Thibodeau preferred Derrick Rose in a tight spot.

But Walker not only played down the stretch of a 110-94 victory over the Sixers, he helped ensure the final five minutes were little more than garbage time. The win snapped New York’s four-year, 15-game losing streak against Philadelphia, with Walker dropping a team-high 19 points on five 3-pointers with five assists.

Those were all season highs for the Bronx-bred point guard, who hadn’t scored more than 11 points in his previous three Knicks games.

“You don’t do this individually. You do it collectively. We need everyone to play well, so it’s not falling on Kemba,” Thibodeau said before Walker’s breakthrough. “Kemba is a good player. We know that. We’re still finding our way. Just be who you are.”

The Knicks (3-1) were coming off a dud two nights earlier against the Magic, a defeat that was both disappointing and unexpected. The players lamented their effort and bounced back appropriately against a better team.

The key, to no surprise, was efficient 3-point shooting. At one point, the Knicks had buried 15 of 23 attempts from beyond the arc. They finished with 16 treys, with Walker as the catalyst and Julius Randle flirting with a triple-double (16 points, 11 rebounds, seven assists).

It was New York’s first victory over Philadelphia since Jeff Hornacek was the coach and Maurice Ndour hit the game-winner.

The Sixers (2-2) are a bit of a mess. Their All-Star point guard, Ben Simmons, wants a relocation so desperately he’s refusing to show up. The Madison Square Garden fans capitalized on the dysfunction Tuesday by briefly chanting in the second quarter, “Where’s Ben Simmons?”

The answer might be “nobody knows.” Simmons is supposedly not mentally ready to join the Sixers, and Philly coach Doc Rivers predictably labeled it a non-distraction.

“It’s not hard. These are pros and we work every day,” Rivers said. “Especially in this day and time where guys miss more games, you practice every day and you go through shootarounds and prepare for guys not playing.”

Joel Embiid was listed as questionable before the game with a knee issue and would’ve been better off not playing. He committed five turnovers in 29 minutes while laboring around the court and shooting 2 for 7.

Evan Fournier (18 points) and Rose (13) were also solid for the Knicks.