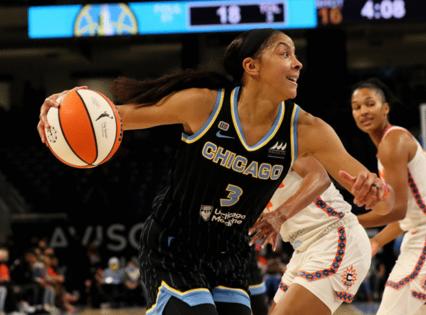 They became a wonderful story because of Candace Parker returning to her hometown and winning another title, and because of two guards who are married starting in a championship backcourt, and James Wade becoming one of sport's more endearing coaches.

Now that the league has had time to celebrate an entertaining postseason, let's make the league better.

Stop competing with the NFL

WNBA ratings continue to rise, and they were particularly good before the NFL season began. Then the Minnesota Lynx played their only home playoff game opposite a Vikings-Seahawks game at U.S. Bank Stadium, and the deciding game of the Sky-Mercury finals went up against an NFL Sunday.

Stop it. Even baseball, once America's most popular sport, can't compete with the NFL.

The WNBA should seize the summer, when it would be in competition with only baseball, which, during the regular season, is a regional sport. If the WNBA insists on playing in the fall — a mistake — then at least schedule games other times than Sunday afternoon.

As a general sports columnist, I desperately search for topics during the summer and am overloaded with options in the fall. When the Lynx play during the summer, I love covering a meaningful basketball game instead of just another baseball game.

Stop with the roster machinations

Last year the Lynx had to "cut'' Layshia Clarendon or Rachel Banham to stay in compliance with roster and payroll limitations.

Lore became a billionaire by investing heavily in ideas he loved. NBA owners who also own WNBA franchises should see the growth and positive trends surrounding the WNBA and pay the players, expand the rosters, expand the league and, later, reap the rewards, just like the investment-first owners in every major men's sport has done over the last century.

Fake it 'til you make it

Charter planes instead of making teams fly commercial. At least for the playoffs. Want to sell yourself as a major sport? Act like a major sport.

The Chicago Sky brought to their victory party the door that Mercury star Diana Taurasi broke during the finals. Brilliant.

The WNBA already has brilliant players, brilliant basketball and brilliant competition to sell. What has made the NFL an overwhelming success is the way people react to it. They bet, play fantasy football, overreact, follow social media for interpersonal dramas and memes and insults.

Play it up. Have some fun. Engage fan emotions.

Yes, so much of this comes down to money. The WNBA needs to pay its players enough that they don't need or want to play overseas. Napheesa Collier didn't make it back for the beginning of the 2021 season and Kayla McBride missed training camp. If the Lynx had gotten off to a faster start, they may have earned a second bye, and Clarendon, a key to their success, might have been healthier.

All WNBA games should be available on readily-accessible broadcast channels. Facebook doesn't deserve this league, and watching games on Twitter is annoying, and forcing fans to buy an extra subscription is a bad idea.

You can gouge people after you've captured a satisfactory market share. Not now.

The WNBA punches well above its weight when it comes to social issues and social justice. It is America's most admirable league.

Keep it up. The people alienated by your stances were never going to attend a WNBA game, anyway. There are millions of good people out there who will gravitate toward women's basketball as the league grows in popularity and scope.

And as Maya Moore has demonstrated, there are things in life more important than basketball. Keep using basketball as a means to make the world a better place. It will pay off.