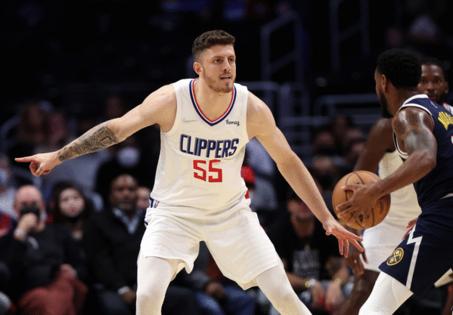 A forward at Oregon who later played and coached in his native Germany, Flo Hartenstein would forbid his son to shoot for an entire quarter. Even if Isaiah Hartenstein, who was well on his way to reaching his current 7-foot frame, was underneath the basket, he needed to get another teammate involved with a pass.

"I hated it," Hartenstein said.

His father persisted for several seasons, until his son was 17.

"I didn't know what he was talking about," Hartenstein said. "I was like, why am I not allowed to score?

"But, looking at it now, it's just having now the feel of passing. … I love to pass."

The experience is paying dividends. Hartenstein's skillful passing, displayed during a preseason when he additionally surprised Clippers coach Tyronn Lue with his ability to defend at the rim without putting himself in foul trouble, helped the 23-year-old win the competition for the Clippers' backup center role Saturday. Hartenstein, like Harry Giles, had entered training camp on a nonguaranteed contract to vie for the 15th and final roster spot.

Giles, a former top recruit whose career has been waylaid by injuries, displayed flashes of his athleticism and is "definitely an NBA player," in Lue's estimation. Hartenstein best fit the Clippers' needs while they await Serge Ibaka's return from a back injury.

"He did a good job, he played well, kind of came in and fit in right away with his passing and being able to get guys shots and backdoor cuts for layups and things like that," Lue said of Hartenstein.

On Friday, Ibaka participated in his first five-on-five play since undergoing season-ending back surgery in June, Lue said.