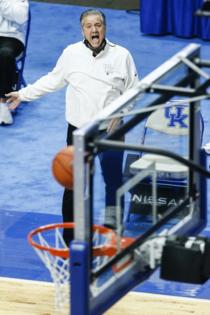 Since 1998, the RSCI (Recruiting Services Consensus Index) has taken all of the rankings from the nation's top recruiting services and combined them into one single ranking to get a composite of the top players in each class.

With all of the national rankings for the 2022 class now updated to reflect the summer recruiting periods, the initial RSCI list is in. And Kentucky recruits are well-represented at the top of the rankings.

Sitting at the very top of the post-summer 2022 rankings is Shaedon Sharpe, a star shooting guard from Canada who committed to Kentucky this month.

Sharpe is ranked No. 1 nationally by 247Sports, Rivals.com, ESPN and On3.com, four of the five recruiting services used for this cycle's RSCI rankings. Longtime recruiting analyst Van Coleman, whose rankings represent the remaining piece of the RSCI pie, has Sharpe pegged as the nation's No. 3 recruit.

Obviously, there are still several months — and a full basketball season — to go before these rankings are finalized, but Sharpe appears within reach of a possible unanimous No. 1 ranking. That's happened only three times in the past 15 recruiting cycles: Gonzaga commitment Chet Holmgren earlier this year, Duke's RJ Barrett in 2018 and Kansas' Andrew Wiggins in 2013.

Kentucky has not signed the RSCI's No. 1 recruit since 2012, when Nerlens Noel tied Shabazz Muhammad for that honor. Anthony Davis was ranked No. 1 the previous year.

Sharpe's top competition for that No. 1 ranking appears to be Duke commitment Dereck Lively II, who is ranked in the No. 2 spot by four of the five recruiting services featured. Rivals.com ranks Lively as the No. 3 player in the 2022 class.

UCLA commitment Amari Bailey is No. 3 in the composite and earned the No. 1 ranking from Coleman, but he's ranked as low as No. 6 overall (by both 247Sports and On3.com). Recruiting analysts have told the Herald-Leader in recent weeks that Bailey is also in the mix for the top spot, but he declined to play on the grassroots circuit this summer, so talent scouts have seen very little of him on the court in recent months.