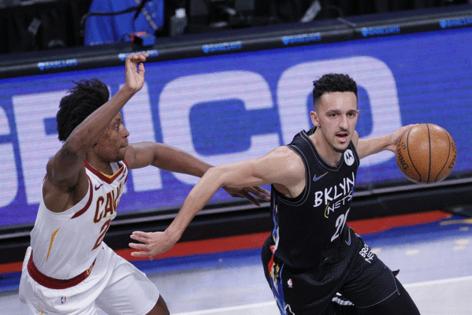 NEW YORK — The Nets have traded guard Landry Shamet to the Phoenix Suns in exchange for guard Jevon Carter and pick No. 29 in the 2021 NBA draft, a league source told The Daily News. ESPN was the first to report the deal between Brooklyn and Phoenix.

The Nets now own five selections in Thursday’s draft — 27, 29, 44, 49 and 59 — giving them more flexibility for subsequent trades in an effort to build a championship roster around their Big 3 of Kevin Durant, James Harden and Kyrie Irving. Nets GM Sean Marks is expected to be aggressive in seeking trades with his draft picks, and a likely scenario includes packaging picks No. 27 and 29 to move up in the draft, then packaging that higher draft pick with a player in a deal for a veteran role player.

Championship-caliber teams rarely keep their draft picks if they can turn them into an impact player that can improve their odds to win it all. The Nets are expected to be one of the most active teams on draft night and into free agency, where Spencer Dinwiddie has garnered interest across the league. The Nets can facilitate a Dinwiddie deal with a sign-and-trade for another player who can improve their odds at winning a championship. Get ready for the alerts to start blaring.

Shamet had a roller-coaster ride of a season in his lone year with the Nets. He started cold, shooting just 25% from 3 in his first month. He finished the season a 38.7% shooter from downtown, more on par with his career numbers, and shot a similar percentage in 12 playoff games. Consistency, however, evaded Shamet, who never strung together two consecutive hot-shooting nights in the playoffs.

For what it’s worth, that consistency also evaded Joe Harris.

The deal has financial implications for the Nets, who are facing a hefty luxury tax bill with a payroll that exceeds $160 million. Shamet is entering the final year of his contract and will enter restricted free agency where he could command a contract somewhere in the ballpark of Clippers guard Luke Kennard’s four-year, $64 million deal.

Carter, on the other hand, is entering Year 2 of a three-year, $11.5 million deal. He will enter unrestricted free agency in 2023.

Carter is a 6-1 point guard who played more off the ball in Phoenix with Chris Paul and Devin Booker running the offense. He is a 38% shooter from beyond the arc in his career but is undersized for a player who isn’t expected to be the primary ball handler in a world where Irving or Harden create offense for the team.

Carter, however, is known to be a gritty defender and has drawn comparisons both to Brooklyn’s Bruce Brown and the Clippers’ Patrick Beverley. The Nets need to improve their toughness on the defensive end.

Elsewhere on the Nets’ roster, Dinwiddie has reportedly expressed interest in playing alongside star guard Bradley Beal with the Washington Wizards. Dinwiddie and Beal share friends, and the Wizards could be on the hunt for a new point guard with reports surfacing of a deal between the Lakers and Wizards for All-Star guard Russell Westbrook.

The Lakers reportedly will be sending Kyle Kuzma, Kentavious Caldwell-Pope, Montrezl Harrell and a 2021 first-rounder to the Wizards for Westbrook, and any number of those players could rerouted to Brooklyn in a deal for Dinwiddie.

Outside of Brooklyn, more than 10 teams have interest in trading for Charlotte’s guard Terry Rozier, the Daily News has learned. The Clippers and Miami Heat are among the teams that have expressed interest, according to a source.

Rozier is coming off of a career year, averaging 20.4 points on 38.9% three-point shooting. His spot-up shooting prowess was on full display in a season in which Rookie of the Year LaMelo Ball’s playmaking abilities jump-started the Hornets to their most successful season in the post-Kemba Walker era.