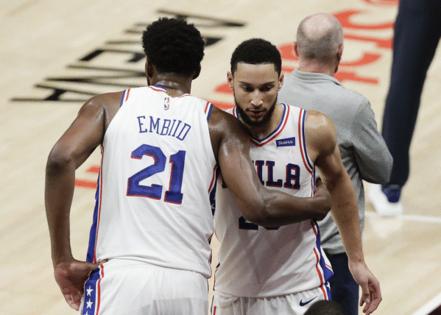 PHILADELPHIA — The player at the center of the Sixers' offseason isn't Ben Simmons. It's Damian Lillard. Simmons is right there with him in the bull's-eye. But if we're talking dominoes, Lillard is tile numero uno. Everything starts with him. And nothing starts with Simmons until Lillard's fate is determined.

That might seem like an awkward position for Daryl Morey. The Sixers have a whole lot of dominoes lined up behind Lillard and Simmons, and there are a whole lot of routes those dominoes could take. But it's even more awkward for the rest of us schlubs. Morey? He has a whole team of assistants feeding him firsthand information on the shape of the offseason marketplaces. By Aug. 2, when teams can begin negotiating with free agents, the Sixers should have a pretty good idea of how the dominoes will end up falling. Us? We can only guess.

— 1) Is Lillard willing to play for the Sixers, or are the Sixers being played?

The Sixers' pursuit of James Harden should leave little doubt about how aggressively they'll vie for Lillard. Morey knows that pairing Joel Embiid with an elite scorer who has an elite handle is the only obvious formula for lifting the Sixers off their current plateau. And he has to know that Lillard might be his last chance to make it happen.