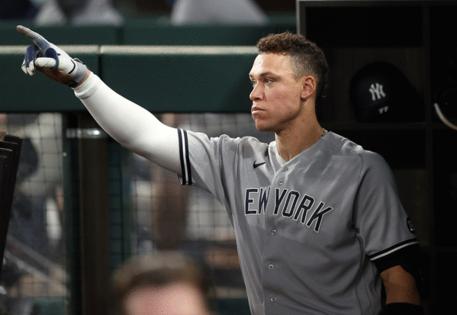 The Padres were a surprise entrant in the pursuit of Aaron Judge. But is anything like that really a surprise anymore?

From now on, let's just consider the Padres interested in every available player — and some players that aren't available.

They were in on Aaron Judge. Not in for very long. But in.

Judge ended up agreeing to remain with the Yankees for nine years and $360 million, a record deal that became public Wednesday morning. The $40 million average salary is the highest in MLB history for a position player.

The Padres' meeting with Judge — which lasted more than two hours Tuesday evening in their home ballpark and included Padres Chairman Peter Seidler, President of Baseball Operations A.J. Preller and manager Bob Melvin — was late enough that they didn't actually make a formal offer to the right fielder. They did make it clear they were willing to meet his price, and the Yankees were evidently under the impression the Padres were serious about paying $40 million a year.

The Padres weren't really close to getting Judge, who was the top priority for the Yankees and Giants. But the fact the Padres made such a significant attempt is absurd enough.

The team has twice in the past two days attempted to become the only team in the major leagues with three players with contracts worth at least $300 million. On Monday, they lost out to the Phillies on shortstop Trea Turner, who took $300 million over 11 years even though the Padres offered him $342 million. (Turner actually turned down a net of around $5 million more after state taxes.)

Either of the free agents would have joined Manny Machado (10 years, $300 million) and Fernando Tatis Jr. (14 years, $340 million) as an unprecedented trio of $300 million men in San Diego. The Yankees are now the only team in baseball with three such players (Judge, Gerrit Cole and Giancarlo Stanton).

As if anyone can truly fathom or predict what Preller will concoct in his mind or Seidler will approve, people familiar with the Padres' intentions say they could effectively re-up their pursuit of shortstop Xander Bogaerts. A highly placed source said Monday in the aftermath of losing out on Turner that while the Padres had shown interest in Bogaerts they were not actively pursuing other shortstops.

They have Tatis and He-Seong Kim at the position, though Kim can slide to second base and Tatis can play in the outfield if they were to sign another shortstop.

One byproduct of all the money being thrown around this winter is that it signals to Machado there is money to be had on the open market (and from the Padres) when he reaches his ability to opt out after the 2023 season.