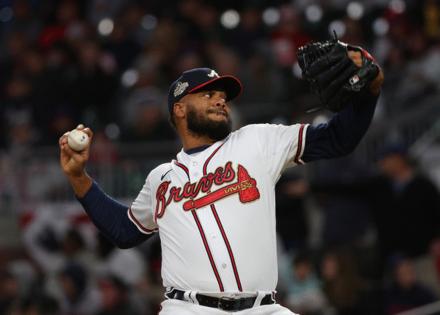 SAN DIEGO — In the middle of an offseason in which they’ve come up short signing several targets, the Red Sox landed an important one on Wednesday morning.

Kenley Jansen, the 35-year-old closer who won the World Series with the Dodgers in 2020 and was again effective in the ninth inning for the Braves in 2022, agreed to a two-year, $32 million deal with the Red Sox, as first reported by ESPN.

The Jansen signing will give the Red Sox bullpen some much-needed help after it was successful on just 57% of save opportunities in 2022, when the Sox relievers blew 29 saves in 69 chances.

The trouble stemmed from the disappointing season by former closer Matt Barnes, who lost his confidence and struggled in the first half, though he found some momentum at season’s end.

If Barnes can return to form, the Red Sox do have some firepower in the ‘pen. With Barnes, Jansen, recently-signed Chris Martin and Joely Rodriguez, Tanner Houck and John Schreiber, there are enough arms for manager Alex Cora to have less trouble navigating the late innings.

Jansen saved a league-high 41 games for the Braves last year, when he struck out 85 batters to just 22 walks in 64 innings with a 3.38 ERA, near-identical numbers to those from 2021, his last season with the Dodgers. With 391 saves and a career 2.41 ERA, Jansen is one of the most established relievers in the game.

The Red Sox are paying for it. The Braves landed Jansen on a one-year, $16 million deal last year, but the Red Sox doubled it to make sure they didn’t miss out on another offseason target.

KANSAS CITY, Mo. — The Negro Leagues Baseball Museum is one of the best places to visit in Kansas City, because there is much to learn about the men and women who were part of that piece of U.S. history.

Bags and baskets and boxes, oh my.

Baseballs? Gobs of them. Same for ...Read More