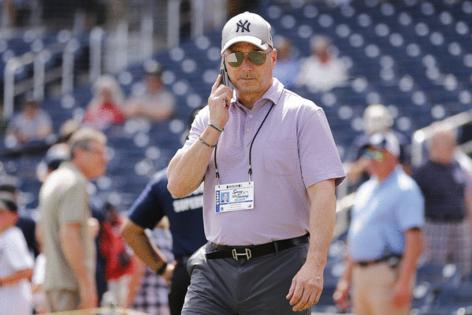 In the least surprising signing in the Bronx this winter, the Yankees announced they had re-signed General Manager Brian Cashman to a four-year deal on Monday. Cashman, who has been at the helm of the Bombers since 1998, had been working without a contract since the Yankees’ season ended in October.

Yankees managing partner Hal Steinbrenner had made it clear that he was not looking for a change in leadership after the season concluded with the Yankees being swept by the Astros in the American League Championship Series.

“It’s just a matter of salary. I’ve told him that I want him back. We’ve talked about it. We’re in the same neighborhood. It’s just semantics,” Steinbrenner said at last month’s owners meetings in New York.

The new deal means Cashman’s reign as the longest-serving GM in MLB will continue. The news will be greeted with both approval and disappointment among the pinstriped faithful. The Yankees pride themselves on their long history and tradition, which some fans feel makes them slow to change and adjust. Cashman, who is the longest serving GM in that Yankee history, is the face of the status quo.

Cashman, who has worked for the Yankees since 1986 when he was a 19-year-old intern, has led the Yankees to 21 postseasons in his 25 years as the GM and 14 American League East titles. The Bombers have won six AL championships under his guidance and four World Series titles.

Since 1998, the Yankees’ 21 postseason berths are the most in the Majors — five more than the Braves and Cardinals, who are tied for second in that span with just 16. The 21 playoff appearances are also eight more than any other AL team, leading the Red Sox, who have 13.

Cashman’s lifetime winning percentage of .589 is the highest of any General Manager with at least 10 seasons of experience whose career in the Modern Era (1950 or later). Excluding the abbreviated 60-game 2020 season, the Yankees have averaged 95.4 wins per year during Cashman’s tenure, while no other Major League team has averaged 90-or-more wins. Additionally, just one other AL team (Boston 89.5) has averaged at least 85 wins per 162-game season in that span.

The Yankees have had a winning record in each of Cashman’s 25 seasons as GM. No other Major League franchise has had 25 straight winning seasons at any point in their respective histories, according to the Elias Sports Bureau. According to Elias, the Yankees have been mathematically eliminated from postseason contention in just 16 of the 3,946 games during Cashman’s tenure as GM.

Still, the criticism of Cashman was louder over the last two years than it had been over the past decade. The Yankees’ last World Series appearance was in 2009 and they have lost to the Astros in their last three ALCS appearances. Since 2009, the Yankees have won just four division titles. There was criticism this spring when Cashman not only failed to sign Aaron Judge to an extension, but came out and detailed the $230-million contract that the face of the franchise turned down.