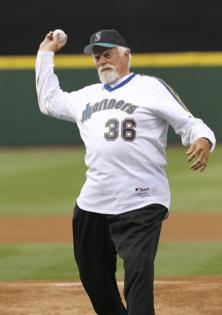 SEATTLE — Gaylord Perry used to call the spitball "my survival pitch," and by the time he got to Seattle in 1982 — barely hanging on at 43 years old, 21 years into his career — survival was his preeminent goal.

Perry was three wins shy of 300, the magic number he knew was needed to reach the Hall of Fame, considering the specter of ball-doctoring that surrounded him. The Braves had released Perry the previous year, and no one but the Mariners, eager for the attendance boost Perry would give them, were willing to give him a contract in '82 — and a month to month one at that. At the end of each month the M's would decide if they still wanted him around.

Well, not only did he last that season and into the next, but Perry's time in Seattle turned out to be one of the most memorable stints in the brief history of the expansion franchise, which had just five seasons — miserable ones, all — under its belt.

Perry, who died Thursday at age 84 at his home in Gaffney, S.C., won 10 games in 1982, including No. 300 against the Yankees on May 6 at the Kingdome. He helped the Mariners stay in unexpected contention until August en route to a 76-86 record, their best at that point. Perry would say often in retirement that Seattle manager Rene Lachemann — six years younger than him at 37 — was among the favorites he ever played for. And the admiration was mutual.

"He was the biggest and best competitor I've ever been associated with," Lachemann, now 77, said Thursday from his home in Scottsdale, Ariz. "I've been with a lot of good ones, but this guy was one of the top, if not the top, as far as going out and wanting to perform and win games. This was late in his career, and he knew he had to go ahead and do certain things to win ballgames."

Everyone knew, or thought they did, what those "certain things" were. This is the guy, after all, who entitled his autobiography, "Me and the Spitter." In that book he wrote that he learned the spitball from Giants teammate Bob Shaw in 1964 and graduated to "the mud ball, the emery ball, the K-Y ball, just to name a few. During the next eight years or so, I reckon I tried everything on the old apple but salt and pepper and chocolate sauce toppin'."

I asked Lachemann if Perry really doctored the ball when he was with Seattle or if it was all just a show.

"No, he used it — but everybody else was using it, too, so what the hell is the difference?" he said. "Guys were cutting balls and stuff like that, scuffing and altering balls."

Noted author Pete Axthelm wrote in Newsweek after Perry's 300th win, "Slathered in grease and heat rub, he smells like a ransacked pharmacy."

As much as Perry played along with the ongoing suspicions — he would go through exaggerated gyrations and touches before every pitch to put the thought in hitters' heads that he was loading up the ball — he bristled at the notion that his career success was predicated on the spitball. Perry wound up winning 314 games, threw 303 complete games (eight of those with the Mariners), was eighth all-time with 3,534 strikeouts and was the first pitcher to win the Cy Young Award in both leagues. He was elected to the Hall of Fame — on his third try — in 1991.