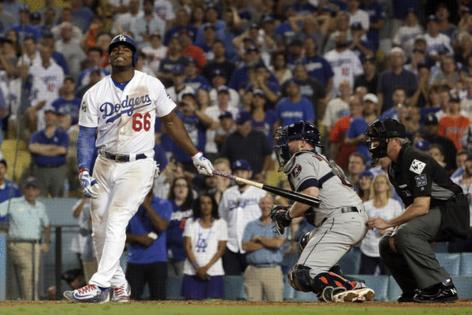 Puig was joined by his attorneys, Keri Axel and Jose Nuno, and his agent, Lisette Carnet, Wednesday at the U.S. District Courthouse in downtown Los Angeles. A judge agreed to continue the hearing until Tuesday.

"We need more time to assess a possible innocence defense," Axel told The Los Angeles Times after the hearing.

Puig, 31, had previously signed an agreement to plead guilty to one count of making false statements, which carries a maximum sentence of five years in federal prison, the U.S. attorney's office for the Central District of California said. He also agreed to pay a fine of at least $55,000.

Prosecutors alleged that Puig "made several false statements to the agents that were material to the investigation" when federal authorities interviewed him Jan. 27 about the gambling ring, according to the plea agreement.

After the agreement was unsealed Nov. 14, Axel told The Times that Puig would be eligible for probation and looked forward to putting the episode behind him, but in the days since, she said, evidence has come to light that's changed her outlook on the case.

Puig had placed bets with an illegal sports-gambling operation run by Wayne Nix, a former minor league baseball player who lives in Newport Beach, but he was not charged in connection with taking part in the ring's operations. Those bets went through a third party, a former collegiate baseball player and private coach referred to in the plea agreement as "Agent 1," who placed and accepted wagers for Nix's business.

Axel said she has discovered multiple messages that Agent 1 and an associate of Agent 1 sent to her client.

Agent 1 and the associate asked Puig multiple times to speak about the federal investigation, but he declined, she said.

Axel told U.S. District Judge Dolly Gee that she wanted time to request and review records held by prosecutors so that she can adequately advise Puig on whether there's a possible defense — including the federal government's report of the interview with Puig, handwritten notes of the interview taken by the agents, and any charging documents or plea agreements pertaining to Agent 1 and the associate.

Puig did not have his own Spanish-language interpreter or a criminal defense attorney with him during the interview, his camp has said.

Axel said she faced multiple challenges in advising her client, who is a Spanish speaker with a third-grade education, and who was playing baseball in South Korea until he returned to the U.S. last week for his arraignment. Trying to advise Puig on complex legal issues while dealing with the language barrier and the time difference was a significant challenge, she said.

Assistant U.S. Attorney Jeff Mitchell, one of two prosecutors working on the case, said that the plea agreement was signed months ago and that prosecutors have made their evidence available to Puig's defense team.

The request by Puig's team may cause the plea agreement to be breached, Mitchell said, though Axel told the judge that Puig did not wish to breach his agreement at this time.

Puig, who defected from Cuba in 2012, became a naturalized U.S. citizen in 2019. Puig last played for a Major League Baseball team in 2019. Since then he played in the Dominican Winter League, the Mexican League and this past season in South Korea.

LOS ANGELES — Dodgers pitcher Trevor Bauer lost twice Wednesday, when a judge allowed the San Diego woman who accused him of sexual assault to proceed with her lawsuit against him and dismissed his defamation lawsuit ...Read More

The Mets have made no secret of their desire to build a “sustainable winner.” If you’ve been paying attention to sports around the New York area over the last few years, then you’ve probably heard other teams cite ...Read More