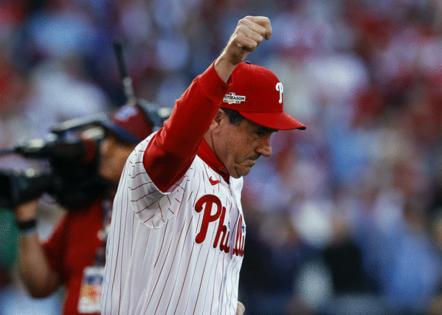 It’s the time of year when we reflect on the people and the things that brought us joy over the past 365 days. From an unexpected playoff run by Jalen Hurts and the Eagles, to a miraculous World Series appearance by the Phillies, to a more perfect Union, to the renaissance of Howie Roseman, it has been an annum of bounty in Philadelphia.

Larry Bowa told me two years ago that Rob Thomson should be a major-league manager. Thomson thought so, too, but, convinced he’d never get the chance, he planned to quit the game after 2022, according to The Athletic. He finally got his shot after the Phillies fired Joe Girardi on June 3. “Topper” went 65-46, won the NL pennant with a No. 6 seed, and came within two wins of a World Series title. He did it all with an injured MVP, just two reliable starters, zero reliable bullpen pieces, and a leadoff hitter who hit exactly .218 in both the regular season and the postseason.

He also happens to be the most likable figure in the history of Philly sports, with all due respect to Dick Vermeil.

In February of 2021, Eagles general manager Roseman had no real head coach, no real quarterback, no real wide receivers, and a bunch of 30-something underachievers that put him in salary-cap hell. Twenty months later he’s got Nick Sirianni, a coach of the year candidate who turned in a 9-8 rookie season, made the playoffs, and is 9-1 this season; Hurts, the “project” quarterback drafted in 2020 whose maturation has paid off as an insurance policy against Carson Wentz’s decline; DeVonta Smith, a first-round wideout home run from last year’s draft; A.J. Brown, who cost a first-round pick, $100 million, might still be a bargain; and Roseman’s getting strong performances from the likes of veterans Jason Kelce, Lane Johnson, Javon Hargrave, Darius Slay, and, occasionally, Fletcher Cox.

Daryl Morey insisted that insecure malcontent Ben Simmons, who was sitting out until he got traded, would be worth more than a bunch of fringe players. Morey waited until the Nets were willing to part with inconsistent malcontent James Harden, who is a superstar, if fading. There’s hope for Harden, who’s injured. Simmons came to town Tuesday. He still stinks.

4. Bryce Harper’s postseason for the ages

Harper, the reigning MVP, tore a ligament in his right elbow in April and missed hardly any time. He broke his left thumb in June and missed two months. As a designated hitter, a role he’d never before played, he still hit 18 home runs with an .877 OPS. That only served to set up a magnificent postseason: a .349 average, six home runs, 13 RBI, an 1.160 OPS, and the winning homer in the NLCS game that sent the Phillies to their first World Series in 14 years.

He then homered on the first pitch he saw in the World Series.

The Process got robbed by one-dimensional center Nicola Jokic in the MVP race for the second straight year by a swarm of analytics worshippers who wouldn’t know a complete basketball player if one campaigned for the award ceaselessly for two straight years, succeeded in spite of injuries to himself and to teammates, and persevered through adversity that only the worst-run franchise in the past decade could manufacture.

The Phillies hired Dombrowski as their president 23 months ago, and he promptly set about to Dombrowski the Phillies. He jettisoned prospects, spent gobs of money, and went for broke. It worked; the Phillies emerged on top from a stacked National League, and have the ammunition to do it again.

But he understood clubhouse chemistry, so he signed Kyle Schwarber and fired Girardi.

Think about it. Philly’s year was so good that the guy who put together the NL pennant winner ranks sixth.

In a town that endured Simmons, Sixers coach Doc Rivers, and Girardi, among others, Gannon — the Eagles’ defensive coordinator, and therefore an assistant coach — was as polarizing, if not more so, than any of them. “Polarizing” might be the wrong word, since polarization implies conflicting views, and most everybody wanted Gannon gone.

However, his refusal to play a more aggressive brand of defense in 2021 was validated by the team’s collapse when he blitzed a lot. It is doubly validated now that he has a defensive backfield that can withstand blitzing, which he calls more frequently now. And now, with his defense ranked No. 2 overall and No. 1 with 21 takeaways, Gannon is immensely popular.

Of course, if Aaron Rodgers, Derrick Henry, Saquon Barkley, Justin Fields, and Dak Prescott roast Gannon’s defense in the next five games, he’ll be right back in Philly’s doghouse.

8. Tortorella comes to town, if only for the drama

The Flyers needed a strong hand and a distracting personality. John Tortorella, a fight-loving, analytics-hating hockey dinosaur who generally despises the media, was available for one last ride. For Flyers fans, it’s a match made in heaven.

OK; it’s good for us columnists, too.

Can you name five big-time college basketball coaches with NCAA titles who constantly behave with class and decency? I can’t.

Not since John Wooden has the college game enjoyed an elite coach who is as fine a gentleman as Jay Wright. As the game deteriorated into a semi-pro bastardization of its former self, with NILs and transfer portals and minor leagues, Wright, 60, quit while he was far, far ahead.

We all should be so wise.

While most of us had our noses up the Eagles’ and Sixers’ butts the last four years, coach Jim Curtin and sporting director (general manager) Ernst Tanner constructed the best team in town. It came within three minutes and a Gareth Bale header of its first MLS Cup title.

What? I mean, it’s Jason Kelce.