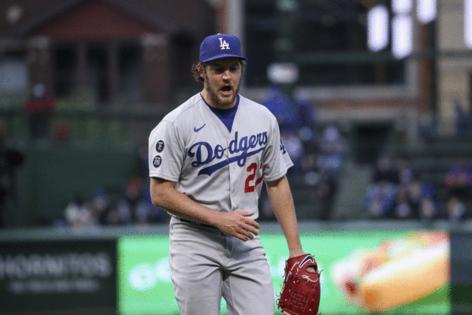 LOS ANGELES — Dodgers pitcher Trevor Bauer lost twice Wednesday, when a judge allowed the San Diego woman who accused him of sexual assault to proceed with her lawsuit against him and dismissed his defamation lawsuit against one of her former attorneys.

Under the rulings, issued by U.S. District Court Judge James Selna, Bauer was ordered to pay the legal fees of the former attorney. The dismissal of that lawsuit does not affect the defamation suits Bauer has filed against five other parties, including the accuser.

After Bauer sued her for defamation, she countersued, alleging sexual assault and battery. Bauer and his attorneys asked the court to throw out her suit, noting she had made the same allegations in her request for a restraining order. Since that request had been denied, Bauer argued, she should not get a second chance to allege actions for which he had been cleared.

In his ruling, Selna wrote the denial of the restraining order was "due to insufficient evidence that the parties will have contact in the future." He wrote that Los Angeles Superior Court Judge Dianna Gould-Saltman did not determine whether Bauer had committed an act of abuse and that neither party had asked her to make such a determination.

"The state court proceedings did not necessarily decide that Bauer did not batter or sexually assault [her]," Selna wrote.

Bauer's attorneys also argued the woman's suit should be thrown out because Gould-Saltman had determined the two sexual encounters were "entirely consensual," but Selna said that argument was "not supported by the record."

"Notwithstanding [the woman's] consent to some form of rough sex," Selna wrote, "Bauer engaged in acts while [she] was unconscious, when she was physically and legally unable to give consent."

Whether Bauer committed assault or battery would be decided at trial, if the case gets there. In court papers, Bauer reserved the right to again ask the court to throw out the accuser's suit, this time on grounds that its filing was "procedurally deficient."

Bauer also had sued one of the woman's former attorneys, Fred Thiagarajah, for defamation based on comments he gave to the Washington Post after the Los Angeles County district attorney declined to file criminal charges against Bauer.

Thiagarajah told the Post that Bauer had "brutalized" the woman, and Bauer objected to what he asserted was at least the insinuation of guilt.

"Judge Gould-Saltman herself stated that Hill's injuries were 'terrible,' " Selna wrote. "Bauer does not present any compelling argument as to why Thiagarajah's using a synonym of the court's own language misstates the court's findings."

Gould-Saltman said in full that "the injuries as shown in the photographs are terrible." Bauer since has submitted to the district court a video that he claims shows the woman in bed with him "smirking and uninjured" after the sexual encounter that allegedly resulted in the injuries.

The woman was examined in a hospital later that day, where she was diagnosed with "acute head injury" and "assault by manual strangulation."

Bauer is appealing his two-year suspension for violating baseball's policy on sexual assault and domestic violence, with an arbitrator expected to rule no earlier than next month. Neither Bauer nor Major League Baseball has said what evidence Commissioner Rob Manfred cited in defending the suspension.

Bauer has consistently denied he violated either the league policy or the law in the two evenings of what his representatives have characterized as unconventional but consensual sex.