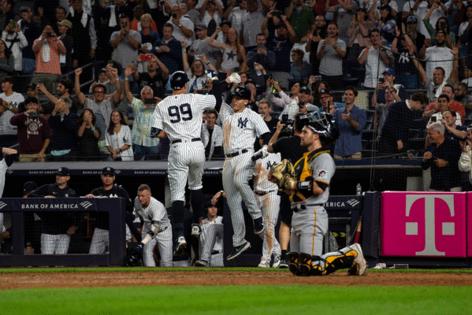 In Hal Steinbrenner’s opinion, Aaron Judge will be back in pinstripes.

Steinbrenner told reporters on Tuesday at the MLB owners meetings that “in my opinion, we are going to be able to” sign Judge.

The Yankees’ chairman and managing general partner is of the few whose opinions truly matter pertaining to Judge’s free agency as he is the one who writes the checks and has also met with the star free agent multiple times.

“I’m not going to allow this negotiation to play out in the media. We’ve had several conversations, and they were all positive conversations, he and I, just the two of us…

“Aaron may want to stay with the Yankees,” said Steinbrenner when asked if he had to make a pitch to Judge. “I’m not going to get into our conversations and what they are, but he’s a very important part of this team.

The right fielder is evidently the priority this offseason for the Yanks, and Steinbrenner’s actions have indicated such.

The owner has placed himself at the forefront of the negotiations, which is not something that he typically does when trying to retain one of his free agents.

“Normally, not as good as I should, probably,” Steinbrenner said when asked how often he gets involved in negotiations. “Usually this is between the agent and the general manager and that’s where most of the conversations lie.

“But I really wanted Aaron because of what he means to the organization. Lifelong Yankee he’s been from the beginning all the way until now. I wanted him to know how I felt in case there was any lack of clarity on his part.”