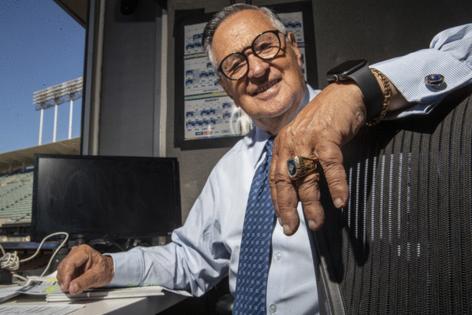 I'd hear his voice when my great grandmother's favorite Mexican soap opera went to commercial.

The attorney network Los Defensores' commercials have been omnipresent on Spanish-language television in Southern California for the last four decades, and this is how many of us were introduced to Jarrín, who will retire as the Spanish voice of the Dodgers at the end of this season.

The television spots often started with an actor talking about how he was injured in a car or workplace accident, after which Jarrín informed viewers Spanish-speaking lawyers were available to help.

His baritone voice was strong but welcoming. He was well-spoken and impeccably dressed. He stood tall and proud. There was an unmistakable dignity about him.

When I made his acquaintance years later, I found that Jarrín carried himself exactly how he did in those commercials. And from what the late Vin Scully told me, Jarrín had been carrying himself like that since he started calling Dodgers games in 1959.

His story is a rags-to-riches immigrant's story, as he came from Ecuador with $40 in his pocket and worked at an Alameda Street factory before landing a job at a local radio station.