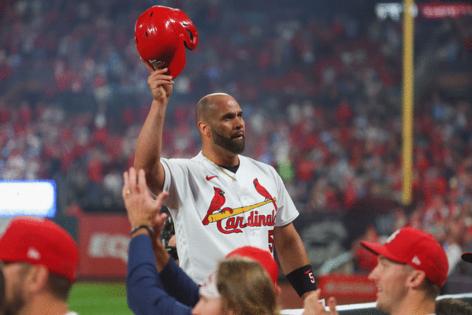 ST. LOUIS — While Jack Flaherty had an impressive audition Friday night not only for a postseason roster spot but a chance to be in the rotation in next weekend's first round, Albert Pujols took another step toward the National Baseball Hall of Fame, not that his route wasn’t already mapped out.

The St. Louis fans who were disappointed not to see Pujols’ 700th career home run — few saw it on Apple TV either — received a giant consolation prize.

On a night when he was honored for No. 700 last week in Los Angeles, Pujols ripped a 1-2 Johan Oviedo slider into Big Mac Land to open the fourth inning, meaning, of course, that all fans in that section will get a free Big Mac sandwich.

The homer was Pujols’ 501st of his career against a right-hander and off a record 456th different pitcher. As often has been the case lately, a Pujols homer either put his team ahead or, in this instance, tied the game at 1-1 and helped lift Flaherty to a 2-1 win over the Pittsburgh Pirates.

Flaherty worked six innings, tying his season high, and allowed one run while striking out six and throwing 95 pitches.

It was Pujols’ 22nd homer of the season and ninth against a right-hander. Since Aug 14, Pujols has 14 homers, second in the majors to Aaron Judge, who had 15 of his 61 since then. Pujols’ .529 slugging percentage is his highest since 2011, the last previous season he played with the Cardinals. And (big shock), he received a standing ovation from the full house of 47,032 at Busch Stadium.

Seven of Pujols’ past nine homers either have put the Cardinals ahead or tied the game.