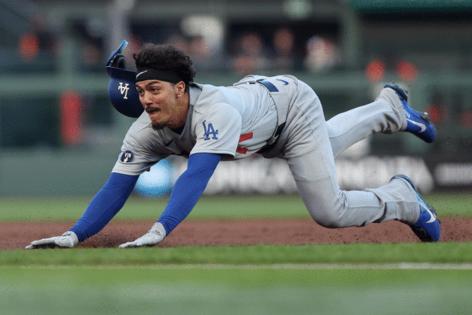 But the plastic and champagne and goggles will remain in storage at least one more day, as the Padres could not beat the team they will eventually need to win a series against if their season is to be truly successful.

The Los Angeles Dodgers beat the Padres 5-2 Thursday night at Petco Park, taking their ninth consecutive series between the teams and putting off any celebration in the home clubhouse until at least Saturday.

A victory Thursday would have meant the Padres could have secured a postseason berth if they beat the Chicago White Sox and the Brewers lost to the Marlins on Friday. Now the Padres still need a combination of wins and Brewers’ losses to add up to three.

The Phillies lead the Brewers by a half-game and have one more game to play than the Padres and Brewers. Any combination of Padres’ wins and Phillies’ losses adding up to five means the Padres earn the fifth of six NL playoff spots.

With an eye on lining up Yu Darvish to pitch the first playoff game, the Padres decided to push their ace’s start back a day to Friday and go with a bullpen game Thursday against the Dodgers, who primarily used relievers to get through nine innings as well.

The Padres also started Brandon Dixon, a 30-year-old called up from Triple-A on Tuesday, as their designated hitter. Dixon last played in the major leagues in 2020, when he went 1-for-13 with the Chicago Cubs.