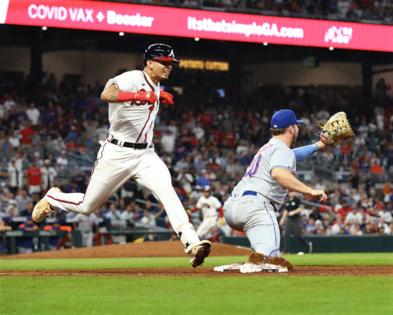 WASHINGTON – At this point, the National League East has the most exciting division race in baseball. As the division hangs in the balance, the Braves and Mets have a crucial three-game series at Truist Park this weekend.

That is, if Hurricane Ian does not interrupt their plans.

The storm could bring heavy rain to Atlanta this weekend, putting the series in jeopardy. The issue here: The Braves and Mets need to play these games because they will go a long way in determining who wins the division. The regular season is almost over, and only one off-day separates the teams’ regular-season finale and the start of the wild-card round (in which the NL East’s second-place team will play).

All of these factors make this a difficult situation.

According to a person with knowledge of the situation, MLB has had conversations with both the Braves and the Mets regarding their coming series. The discussions have not included specific relocation sites.

It is important to note that, as of Tuesday afternoon, MLB was not at a point where a potential change of plans is close to becoming reality. That, of course, could change with more information.

MLB has been monitoring the forecast and is communicating with its experts, including the weather service it uses.

In the past, MLB has relocated multiple series when circumstances have called for it. In 2017, following Hurricane Harvey, the Astros and Rangers played at the Tampa Bay Rays’ stadium. In 2008, Hurricane Ike forced the Astros to play two games against the Cubs in Milwaukee instead of Houston.

As of Tuesday, weather forecasts projected rain Friday and Saturday in Atlanta.

“A little,” Braves manager Brian Snitker said when asked if he has followed the forecast. “I’ve seen it on the Weather Channel and everything. Looks like it’s going to be dicey.”