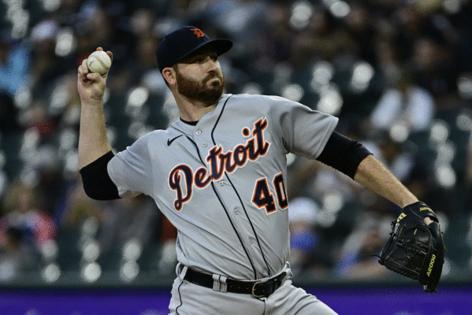 But that doesn't mean they can't still have some fun. And there was plenty to enjoy in their 7-2 win over the free-falling Chicago White Sox Saturday night at Guaranteed Rate Field.

There was Javier Báez, who has hit in nine straight games against the White Sox this season, blasting a 410-foot, three-run homer in the seventh inning and then taking 30 seconds to lope around the bases, cupping his ear as he rounded first, egging on the 36,000-plus who had been booing him all night.

Báez had three hits and is hitting .354 and slugging near .600 with three doubles, two triples, four homers and 14 RBIs this month.

There was Akil Baddoo, who has struggled to master the craft of bunting, igniting that four-run seventh dropping one perfectly on lefty Jake Diekman and beating it out for a single.

There was Riley Greene, who was excited about some swing adjustment he'd made earlier in the day, ripping three singles, the last a left-on-left, RBI knock off Diekman.

There was Harold Castro, who came into the game on a 1-for-24 jag, belting a 416-foot, two-run homer in the first inning off White Sox starter Davis Martin and collecting two more singles and another RBI. It was Castro's career-high seventh on the year.

There was reliever Alex Lange who pitched a clean sixth inning with the Tigers holding a 3-2 lead. He’s now pitched 7 1/3 hitless innings with 11 strikeouts this month.

But before all that happened, the grit of starting pitcher Drew Hutchison happened. And without that, the night might've gone differently for the Tigers.

Hutchison took a three-punch combination to the kisser in the bottom of the fourth inning and did not buckle.

He'd allowed a single and two walks and had a 2-0 lead going into the fourth. Then, boom, Eloy Jimenez hit a 2-1 fastball into the seats in left. Next pitch, boom, Gavin Sheets smoked a slider 421 feet into the seats in right to tie the score. Three pitches later, AJ Pollock doubled.

Although pitching coach Chris Fetter came out to give Hutchison a breath, the bullpen remained quiet. As did Hutchison’s heartbeat.

He got Yasmani Grandal to ground out to Castro at second, advancing Pollock to third. He got rookie Mark Payton to hit a ground ball to second, too, and Castro made a strong throw home to nab Pollock.

Even after he drilled Josh Harrison with a fastball to extend the inning, Hutchison regathered and got Elvis Andrus for the third out to keep the score tied.

Momentum change. The Tigers responded by taking the lead right back in the top of the fifth on singles by Greene, Báez (who was thrown out at second) and Castro.

Hutchison pitched a clean fifth and entrusted the 3-2 lead to the bullpen. Lange, Will Vest and Garrett Hill (two innings) took care of that, covering four scoreless, one-hit innings.

The Tigers are ensured a winning road trip, having won two of three in Baltimore before winning two straight in Chicago.