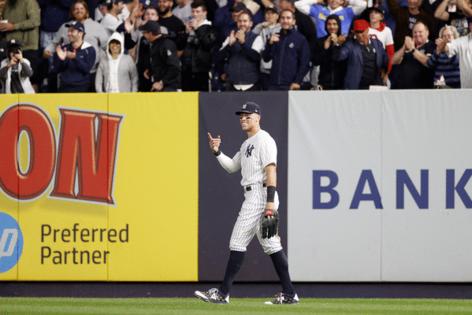 The Red Sox said they were going to come right after Aaron Judge in this series, but they didn’t stick to their word.

At least they kept him in the park.

Judge was walked three times, struck out once and came within a few feet of a historic home run, but ended the night stuck at 60, one shy of Roger Maris’ American League record.

Despite keeping Judge quiet, the Red Sox fell apart in the late innings and took a 5-4 loss to the Yankees in the Bronx. The win clinched a playoff berth for the Yankees, who have now qualified for the postseason in 24 of the last 28 years.

The Sox were up 4-3 heading into the eighth, when the Yankees scratched together a run on a single, stolen base, ground ball and sacrifice fly to tie the game against Ryan Brasier.

In the 10th, Josh Donaldson hit the game-winning RBI single off Kaleb Ort.

The story of the night was Judge, who had his entire family as well as the entire Maris family watching him at Yankee Stadium. Whenever Judge came to bat, everybody in the park stood up, most holding their cell phones high in the air in case Judge made history. The pressure wasn’t what kept Judge in the yard; the Red Sox cautiousness was.

Manager Alex Cora said before the game that the Sox would attack Judge with starter Michael Wacha, who entered the game having held Judge to an 0-for-14 with nine strikeouts off him. But the first time Wacha met Judge in the first inning, he walked him on four pitches.

His second time up, Wacha walked him again, though at least this time he threw him a few strikes first.

There was nowhere to put Judge his third time up in the fifth inning, when Wacha had men on first and second and one out. This time he attacked, and Judge went down swinging over a changeup.

PITTSBURGH — Everything about Thursday night’s Pirates game against the Chicago Cubs felt a little off.

PHILADELPHIA — Good teams find ways to win when some things aren’t clicking, and for the Phillies, that thing, right now, is their offense. So, on Thursday night they beat the reigning World Series champions with their...Read More

With big days from Mike Yastrzemski and Joc Pederson and an immaculate effort from their bullpen, the Giants beat the Rockies, 3-0, on Thursday, to complete their first four-game sweep of the season.