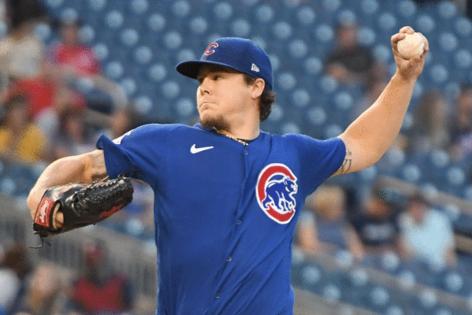 The notable statistic highlighted the effectiveness of Steele’s four-seam fastball and his ability to suppress hitters from slugging against the pitch. It has been his strength the entire season, limiting barreled balls and turning him into a more efficient pitcher.

Steele’s fastball certainly has been on opposing teams’ scouting reports, but one element had largely gone under the radar leading into his July 22 start in Philadelphia.

Steele was on the verge of setting a pitch-tracking record, needing only 21 four-seam fastballs to throw the most without allowing a home run on the pitch. He was looking to surpass former San Diego Padres closer Heath Bell’s 807 fastballs in 2010.

Steele saw a tweet with the record-setting information before his start.

“Why did I just read that? Because I was like, it’s totally going to happen tonight,” Steele recalled Monday to the Tribune.

The next day, Steele spoke to Schwarber, who told him he also had seen the tweet pregame.

“It’s just how things work,” a smiling Steele said. “I know if I wouldn’t have read that that day and not known anything, it wouldn’t have happened probably.”

Steele entered Tuesday’s start against the Washington Nationals with his four-seam fastball accounting for 57.2% of his pitches thrown. He relied on fewer fastballs than average in the 7-5, 11-inning win at Nationals Park but still produced a quality start, his seventh of the season.