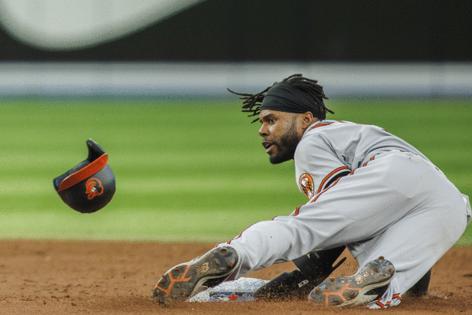 TORONTO — For all his talents, Adley Rutschman’s greatest strength might just be his ability to discern balls from strikes, a model of the swing decision-based development plan that floods the Orioles’ minor league system. At times, it’s burned him, with his awareness of the strike zone perhaps sharper than that night’s home-plate umpire.

On Tuesday, when he dropped his bat head on Toronto Blue Jays ace Alek Manoah’s slider just below the strike zone, he showed that the area in which he can do damage is expansive. His solo shot came two pitches after Cedric Mullins also delivered one, with the back-to-back home runs evening a game the Orioles eventually won, 4-2, to move within half a game of Toronto for an American League wild-card spot.

The Orioles (61-55) were eight games under .500 when Rutschman, then the game’s top prospect, was called up to the majors for the first time, and he has been transformative on both sides of the ball. In his past 54 games — a span that is a third of a full major league season — the 24-year-old has hit .283/.395/.516 with 22 doubles, seven home runs and a 36-to-34 strikeout-to-walk ratio to firmly plant himself within the AL Rookie of the Year race.

Working behind the plate, he guided starter Dean Kremer through some early rough innings, including throwing out an attempted base stealer in the bottom of the seventh. Kremer finished seven innings despite facing a 2-0 deficit two batters into his outing.

The home runs from Mullins and Rutschman erased that. Manoah had allowed one hit the first two times through Baltimore’s lineup, with a single from Rougned Odor prompting a storm of boos for a player still unpopular in Toronto for punching José Bautista in the face six years ago while with the Texas Rangers.

Terrin Vavra, who like Rutschman is a rookie who works counts, drew a one-out walk off Manoah, moved to second on an Odor groundout and scored on a single from Ramón Urías. Ryan McKenna, in the lineup against a right-handed starter after recording his first three-hit game, drove home Urías with another knock.

Baltimore’s offense was unproductive outside of those two frames, but Kremer, Dillon Tate and Félix Bautista made those runs stand as the Orioles won a fifth straight matchup against the Blue Jays, matching their victory tally in last year’s season series.

After an infield single began his night, Kremer surrendered a home run to Vladimir Guerrero Jr. to put the Orioles in an early two-run hole. When he walked off the mound after the seventh inning, those two runs remained all the Blue Jays scored.

Toronto loaded the bases against Kremer with one out in the third, but he got Matt Chapman to ground into the double play for a scoreless inning. That began a stretch in which he retired 11 of 12 Blue Jays, with a bunt single from Santiago Espinal spoiling it.

But Rutschman threw out Espinal trying to steal second before Odor ranged to his left for an inning-ending groundout, with Ryan Mountcastle making a strong pick at first base.

Tate worked a quick eighth before Bautista struck out two in the ninth for the save.

On top of being half a game behind the Blue Jays with the chance to surpass them with a sweep Wednesday, the Orioles kept pace with the Tampa Bay Rays, who remained 1 1/2 games in front of Baltimore in the wild-card race by again beating the New York Yankees.

The Seattle Mariners, who entered the day holding the top of the three wild-card spots with a two-game lead on the Orioles, did not begin play until late Tuesday.

ANAHEIM, Calif. — It requires a good deal of optimism to think that the entirely homegrown lineup the Angels used on Friday night has the same future as the one they last used 23 years ago.

If nothing else, this group ...Read More

SEATTLE — After 21 long years of frustration and failures, of close calls and coming up just short, of spring trainings filled with hope and offseasons spent with regret, of entire careers without champagne celebration ...Read More