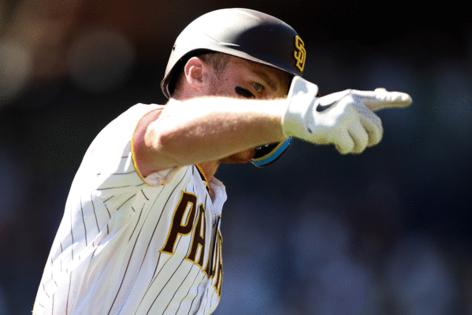 A 13-7 victory over the Giants on Wednesday afternoon at Petco Park was far more dramatic than the final score made it seem.

After Sean Manaea allowed three runs in the top of the third, the Padres batted around and scored six runs in the bottom of the inning.

After Nabil Crismatt was charged with three runs in the top of the sixth, the Padres batted around and scored seven runs in the bottom of the inning.

The Padres had 16 hits Wednesday and 11 Tuesday.

Between getting 10 hits on Aug. 3 — in the first game celebrated trade-deadline acquisitions Josh Bell, Brandon Drury and Juan Soto were in the lineup — and Tuesday, the Padres batted .168 over a five-game losing streak.

The Padres hit two home runs Wednesday and two Tuesday. In the previous five games, they were homerless.