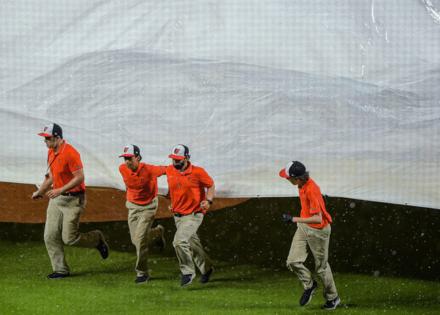 BALTIMORE — The Orioles’ series finale against the Toronto Blue Jays was postponed Wednesday night after a thunderstorm began about an hour before first pitch and showed little signs of letting up at Oriole Park at Camden Yards.

The game has been rescheduled to Sept. 5 as part of a traditional doubleheader that will begin at 1:05 p.m.

The rainout ensures Baltimore remains tied for a playoff spot for at least another 24 hours. A Tampa Bay Rays loss to the Milwaukee Brewers earlier Wednesday closed the half-game gap between the Rays (58-52) and the Orioles (58-52) for the third and final American League wild-card spot.

The Orioles have won seven of their last eight games to surge up the standings, including the first two games against the Blue Jays (60-50), who hold the top wild-card spot. On Monday, home runs from Ramón Urías, Austin Hays, Anthony Santander and Ryan Mountcastle powered Baltimore to a 7-4 series-opening victory. Then on Tuesday, the Orioles earned their 25th comeback victory of the season, 6-5, as Rougned Odor crushed the go-ahead homer in the eighth.

Since June 11, the Orioles have gone 34-17. That .667 winning percentage is the second-best mark in the majors, behind only the Los Angeles Dodgers.

The Orioles head to Boston to face the Red Sox for one game Thursday, a mini-series made as a result of the owners’ 99-day lockout of the players. Then Baltimore travels to Tampa Bay for a series with heavy playoff implications.

Even as Baltimore finds itself in an unexpected playoff race, manager Brandon Hyde has tried to quell too much focus on anything beyond that day’s game. Asked whether he’s talked to Washington Nationals manager Dave Martinez about the latter’s “Go 1-0 today” mantra, Hyde said the pair of former Chicago Cubs coaches hadn’t. But it’s a mentality Hyde employs.

“I’ve heard him say it a bunch of times, and I’m very close to him,” Hyde said. “That’s what you’re supposed to do. You’re supposed to try to not look too far ahead and try to win tonight’s game. And if you don’t, it’s going to bite you. Do the task that’s in front of you.”

— Right-hander Grayson Rodriguez threw 25 fastballs off the mound Wednesday for the first time since he landed on the injured list with a Grade 2 lat muscle strain, a source with direct knowledge of the situation told The Baltimore Sun. The source added that Rodriguez is expected to pitch off the mound again Friday as he continues to recover in Florida.

— Shortstop Jackson Holliday, the first overall selection by the Orioles in this year’s draft, made his professional debut in the Florida Complex on Wednesday. He singled in his first at-bat.

— Baseball America updated its Top 30 prospect rankings for each team, adding the recent draft picks and trade acquisitions for the Orioles. Baltimore’s top four draft signees made the list: Holliday at No. 3, outfielder Dylan Beavers at No. 9, infielder Max Wagner at No. 21 and outfielder Jud Fabian at No. 23. Right-hander Seth Johnson, acquired from the Rays in the three-team deal that sent Trey Mancini to the Houston Astros, was ranked No. 10. Right-hander Chayce McDermott came in at No. 17 and left-hander Cade Povich was No. 29.