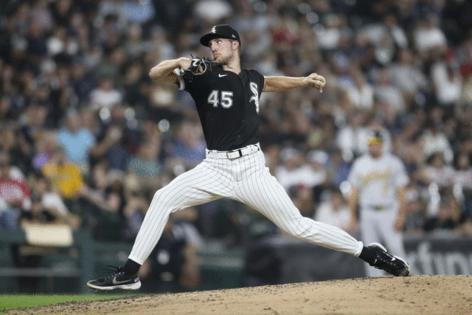 ARLINGTON, Texas — The Chicago White Sox drafted Garrett Crochet in June 2020, and the No. 11 pick found himself making big pitches in the big leagues that September.

The left-hander didn’t allow a run in five 2020 appearances spanning six innings. He continued to be one of the more dependable members of the bullpen last year.

Crochet, 23, was ready for an expanded role in 2022 and looked sharp in spring training before suffering an injury that required season-ending Tommy John surgery.

He provided an update during the weekend while with the Sox for their series against the Texas Rangers.

“Things are going well,” Crochet said Friday at Globe Life Field. “(I’ve) been training back in (Arizona). Kind of going about my business the way I have the whole rehab process. Just taking it one step at a time.

“(I’m) playing catch at the end of the month. Really looking forward to that. But in the meantime, working on shoulder strength and stability with the arm.

“Everything is progressing as we expected it to, so I’m excited to get a ball in my hand.”

He began the eighth inning of a March 31 Cactus League game against the Cincinnati Reds with a strikeout. He went to a 3-1 count on the next batter before being looked at by the training staff and exiting the game.

The next day, Sox general manager Rick Hahn said the “preliminary MRI reading is not great,” and Crochet underwent surgery in early April.